By Kathy Kastner with Zal Press

Day to day: the social and the practical

Around the dinner table, the mood was relaxed and jovial – exemplifying the comfort and relief of a ‘safe’ environment. Even for these patient and caregiver Opinion Leaders, there’s often anxiety about awkward reactions during meals when explaining “I have Type 2 diabetes”: defending choices they have to make is but one of the social implications of a PWD.

Scheduling testing and taking necessary medication is such that often a PWD doesn’t even want their family to know. As Aida explains, “I have to hide it from my children.”

Stigma and being judged

Stigma, being judged, misconceptions and interference – even if well meaning – are often everyday hazards for a PWD. Stigma because the assumption is if you weren’t born with it, you’ve brought it on yourself. Being judged by what you eat: ‘you only have yourself to blame – it was your undisciplined eating habits that ‘got you here.’ 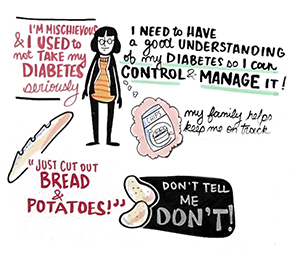 Aida, diagnosed 7 years ago, comes from a family and a culture that loves to eat (is there a family and culture that doesn’t love to eat) “every social event is all about food.” Her educational journey to patient empowerment has her at every event related to Diabetes. Her mission as an Opinion Leader: to become more empowered and to have choice. Collaboration with Opinion Leaders ‘round the table gives her confidence.

The rising number of PWDs hasn’t led to the educational support needed. Lori is a caregiver advocate for her father and brother. In her experience as Opinion Leader, she knows: education and choice are what’s needed.

The cost of managing: hundreds of dollars

Cost is another factor that smacks even the most stalwart Opinion Leaders. For Aida, it’s a monthly $200 plus. Heather comments: ”insulin is covered but not the needles. What do they think …you’re going to drink it?” In addition to the insulin, there are tablets, glucometer testers and strips. Expense works against control.

In their research, Bringing patient centricity to diabetes medication access Canada the authors point to the Charter of Rights:

“Medication access is a key right and responsibility noted in several sections of the Charter, given the central role played by medications in diabetes management…. 15% of PWD [people with Diabetes] indicated a lack of government and/ or private prescription drug coverage, while another 30% of PWD reported a lack of insurance to cover blood glucose monitoring supplies or equipment.” 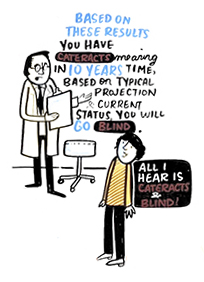 At work, PWDs often feel they must not let their co-workers know that they are on insulin. As Aida pointed out: “There’s still a stigma and a misconception about insulin that if you’re on insulin, death is coming.” Aida’s job involves many social functions, but worry about this perception has resulted in missed injections – risking further health complications.

Jim is an Opinion Leader who describes himself as a ‘layperson without technical or medical knowledge’. He shares what many patients ‘take away’ from a hurried appointment with any healthcare professional: just the bad news. This is a communication issue that’s been proven in more than one study. Jim, who feels healthcare professionals should make more of an effort to ensure patients understand, takes heart, hearing Heather’s modus operandi “I’m impressed at how you treat patients.”

By Kathy Kastner with Zal Press

As anyone with health issues knows, there’s a ripple effect: it’s never ‘just about the patient’. Aida’s husband and children take an active role in helping their mother manage. This can be a bonus and a burden. 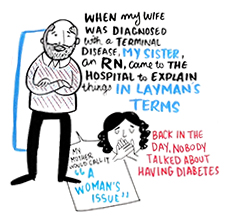 Jim is an Opinion Leader who is active in several advocacy groups. As with many patients, Jim feels he is not ‘a medical expert’. Fortunately his sister – a nurse – helps him keep tabs on his health: Jim feels lucky to have his sister ‘interpret’. His observation: everyone needs a support person. However, since many family members have been uncomfortable when he has self-injected in front of them, Jim minces no words when he says: “Family can also be a pain in the ass.”

Stigma, Shame and the Blame Game

The stigma of the perception that the PWD only has ‘himself to blame’ is something Opinion Leaders are often faced with – contributing to shame and self-blame. For many, anxiety is a constant companion, along with the juggling and balancing to maintain the ‘right’ sugars that make up the the day to day reality of a PWD.

Aida family’s perception of being on insulin is based on myths and misperceptions from generations back. She welcomes becoming more involved as an Opinion Leader and took heart from Heather – an established Opinion Leader and nurse who diagnosed herself 22 years ago. Even with the daily rigors of managing, Heather doesn’t consider herself ‘sick’. 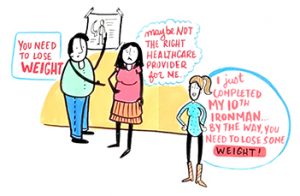 Beyond each person’s family and social circles, there’s the healthcare world and its inconsistencies. Lori and Heather share what they’ve seen time and again in their role as Opinion Leaders: the ‘credibility’ factor: health care practitioners that PWDs can’t relate to – whether it’s a healthcare professional who is totally out of shape, or in ‘Iron Man’ top condition. This applies across the board: physicians, nurses, foot doctors and even dietitians.

There is much to be learned by PWDs and the world around them: Often there’s the perception that one-size-fits all. That just doesn’t apply to a PWD – where one PWD’s normal may be a ‘6’, for another it’s something else. Heather pointed out, it takes an effort and ‘a lot of talking ’ to establish what’s ‘right’ for each PWD.

In an effort to ensure that all staff get a sense of the day to day for a PWD, her Diabetes Center has every new staff member live for a week like a PWD. They are given props – empty needles and ‘smarties’ for pills. They have to record what they eat and drink and how they’ve exercised. This goes a long way to being more empathetic to the ‘lived experience’ of PWDs.

Government: out of touch with the reality of PWDs

Jim points to larger problems: A Government that’s out of touch with health costs for PWDs– a particular hardship for many who have no insurance coverage.

From Bringing patient centricity to diabetes medication access in Canada:

Against international comparisons, Canada also performs poorly with respect to diabetes-related hospitalizations, mortality rates, and access to medications. Diabetes and its comorbidities pose a significant burden on people with diabetes (PWD) and their families, through out-of-pocket expenses for medications, devices, supplies, and the support needed to manage their illness. Rising direct and indirect costs of diabetes will become a drain on Canada’s economy and undermine the financial stability of our health care system.

A personalized approach to medication access, to meet individual needs and optimize outcomes, is also a key enabler. PWD and prescribers need reimbursement approaches that allow them to use existing tools (ie, medications and supplies) to manage diabetes in a timely manner and to avoid and/or delay major downstream complications.