By Holly Bridges and Zal Press

In the second gathering of Canadian women who suffer from uterine fibroid tumours, patients and physicians alike rolled up their sleeves to share and learn how this group is beginning to influence better health outcomes and improved quality of life for the one in four Canadian women suffering from this condition.

The day was recorded on video and graphic illustrations that captured the emotions and intensity of the day. 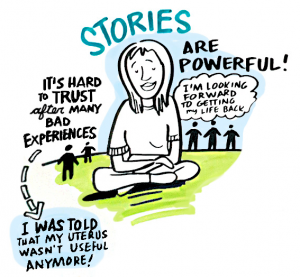 The UF Collaborative Forum in Toronto was the first time that women and gynecologists came together to share their different perspectives on the gaps in health care that often leave women to bleed with limited choices of treatment. This groundbreaking event began the vital conversation between healthcare professionals and patients with the goal to establish a unique collaboration that tackles the critical issues affecting treatment and care.

The women who attended represented all stages of the uterine fibroid fight, including those facing surgery, those on the brink of emotional and physical collapse from years of suffering from painful and often uncontrollable bleeding, and those who have emerged victorious and symptom-free after hysterectomy or other treatments.

Val explained why she fought for five years to save her uterus, the organ that simply gets no respect.

Mercy, who also underwent fibroid surgery five years ago, described her journey to save her uterus as “traumatizing.”

In our original series of stories Patient Commando highlighted the many gaps in the treatment of fibroids, the inconsistency in treatment between physicians, the lack of awareness in our society about menstrual disorders and, most important, the burden of illness women live with every day.

Now almost a year and a half after our last series, a new set of stories has emerged as we continue to examine the issue and track the progress and achievements of this group. 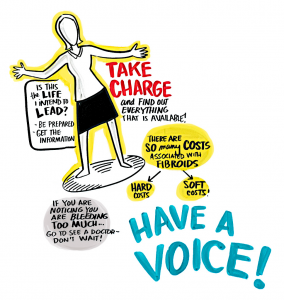 While many of the women attending the UF Collaborative Forum expressed frustrations similar to the original group, the big difference this time was having physicians sitting at the table, sharing insights into the challenges they face treating patients. For most of these women, it was their first opportunity to talk with physicians about fibroids outside of the therapeutic relationship. And the same could be said for the physicians who listened attentively to the compelling and gripping personal stories.

Watch in the coming weeks as we pull back the curtain on this incredible day. You’ll hear more from Val and Mercy and other women such as Pat Lee from Canadian Women with Fibroids.

All in all, we’ll discuss six main themes:

Community – What is this uterine fibroid patient group and what do they want to say?

Medicine – The Society of Obstetricians and Gynecologists of Canada has released new treatment guidelines for fibroids. How will this affect physician practice?

Awareness – How will the uterine fibroid message be heard?

Advocacy – Fibroid women have self-organized and even made submissions to the federal government to approve certain drugs. What else can they do, how, when and where?

Collaboration – How do they continue partnering with physicians and other potential partners who may be interested in helping them grow?

The future – Where is this movement headed at this fork in the road? What can they learn from others like the budding Alberta Women’s Health Coalition?

The fight against uterine fibroids in Canada has taken a turn for the better and is picking up steam.

For more information about the UF movement:

Click on the graphics to understand why this movement got started… 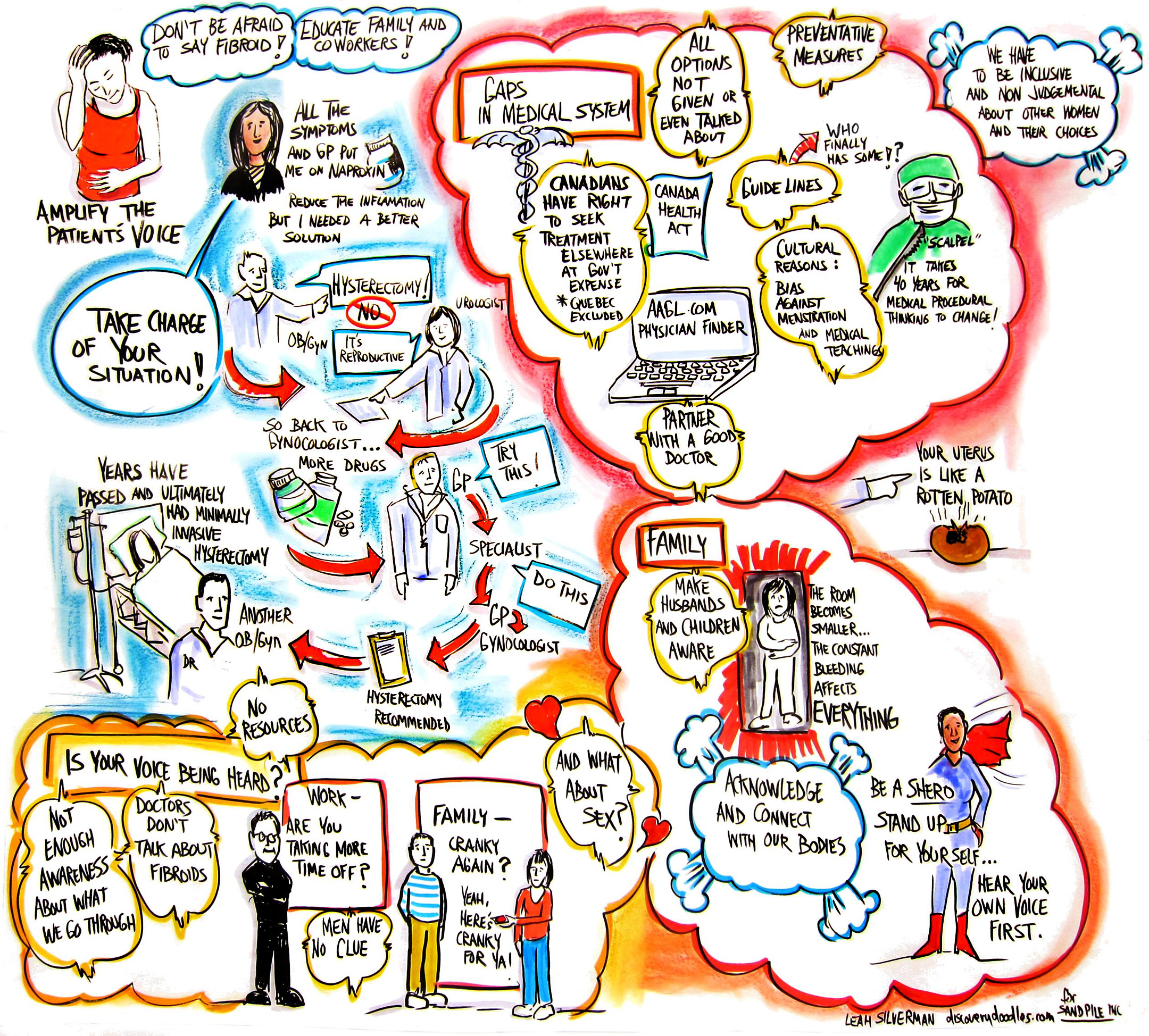 …And why it’s gaining momentum today…

Sir Terry Pratchett, the best sellling British fantasy writer who was only eclipsed by Harry Potter, died March 12 at his home at age 66. Pratchett suffered from a rare form of Alzheimer’s disease and was an outspoken advocate for assisted death.

The question I’m left with upon hearing this news is: Was his death UN-assisted?

Sir Terry, diagnosed at age 59, shared his journey with Alzheimer’s widely and publicly while at the same time sparking public debate on the issued of assisted death. From documentaries to lectures he travelled widely to examine the topic. Famously, he was quoted:

“I have vowed that rather than let Alzheimer’s take me, I would take it,” he said. “I would live my life as ever to the full and die, before the disease mounted its last attack, in my own home, in a chair on the lawn, with a brandy in my hand to wash down whatever modern version of the Brompton Cocktail some helpful medic could supply. And with Thomas Tallis on my iPod, I would shake hands with death.”

I trust he got the death he so yearned for.

This video is the famous Richard Dimbleby lecture at the Royal College of Physicians that he gave using actor Tony Robinson as his voice.