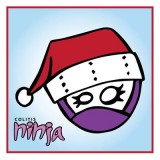 On December 15th, 2009, I was matched up on eHarmony with a man named David (for the SECOND time – long story, I’ll explain later!!!). Being tired of waiting for the men to make the first move and message me first, I sent him my initial questions. I was a little surprised when he responded, but he did and shortly after that (January 23rd of 2010 to be exact) we started dating.

About a year later, in January of 2011, the symptoms started. It began with diarrhea and rapidly advanced to severe rectal bleeding. I told David that I was having some digestive issues, but didn’t mention the blood (I mean, who wants to tell their boyfriend about their bathroom habits!?). I thought it was a tummy bug on top of vicious hemorrhoids, so I ignored it. I started going to the bathroom 20+ times a day. Sometimes those bathroom visits would produce nothing but pools of blood in the bottom of the toilet. I finally went to the doctor at the end of January and by Valentine’s Day of 2011 I had my diagnosis of Ulcerative Colitis.

As I’ve browsed the message boards and support groups, I am overwhelmed with the number of people who are concerned about having any kind of relationship with a chronic illness. The countless hours of misery lying in bed unable to “be there” for the other person. The constant hospitalizations, vicious medications and the general torture of having an IBD is almost unbearable. Somehow, we survive and live to see another day. It is difficult to maintain a relationship when you’re sick. But it can be done.

Like anyone, I had my fear of being alone. Especially since my health had been sapped from me. I was surprised that David did not break up with me right then and there. I’ve dated guys in the past who couldn’t even deal with my allergies and hypoglycemia (“You’re always sick!” they complained).

Fast forward to my birthday, August of 2011. We’d gone up to Tennessee where David’s parents have a cottage in the mountains. Earlier that year, David told me of the “Legend of Boutcher Cottage.” The cottage has been in his family for many generations. Supposedly, David’s grandmother (named Honey) stole a piece of jewelry from her mother (for whatever reason, no one’s quite sure why) and hid it somewhere in/near the cottage. She left clues to find this treasure all over the house.

David, his brothers, and his father before him, had supposedly been searching for this treasure for many, many years, but no one ever found it. His parents confirmed this story one morning when we were having breakfast together. Each person had their own theory about what was stolen and where the treasure was now. David’s father (the skeptic) said that he thought it was all a hoax and there was no actual treasure and if anything, all Honey did was hide a bunch of toys. Still, it makes for a fascinating story.

While we were visiting the Cottage, I started having digestive problems again–thanks UC for attempting to ruin my birthday! I lay in my bed afraid to move, while David began playing with his new video camera. He was giving the “audience” a tour of the Cottage. He opened a book, and out fell a clue written in purple crayon on a rather old piece of paper… Clue #3.

David was so excited he came running into my room and told me that he found one of the clues to the legendary hidden treasure. It took all the strength and willpower I could muster, but I love the man, so I resolved to not let UC ruin his excitement. This is what he’d been searching for!

One clue led to another and another until finally, we reached the destination. Underneath a cinder block step, there was a dirty old bag buried in the dirt. We decided to open it somewhere special (after all, this had been a family treasure that had been hidden for many, many years!), and what better place than the Point on the mountain that overlooks the valley?

We drove out there, full of excitement (I’m afraid bugs/snakes may come creeping out of that old, dirty bag in the back seat). There’s a Gazebo on the point, we decided that this would be a great place to open the treasure. We set up the camera for the moment of truth. Sitting down, we unwrapped the treasure (the whole time I’m freaking out about the possibility of some worm or creepy crawly thing that might decide to jump out). Finally, we pulled out a tiny box.

“Honey,” David began (remember, his grandmother’s name is Honey), “I’ve been looking for you all my life…” At this point, I’m thinking, Aren’t you being a little over dramatic? He got down on one knee (I’m still too worried about bugs to notice this) and said, “I want to ask you to be my wife.” Wait, WHAT!? So yeah, I started hyperventilating and burst into tears before saying yes. 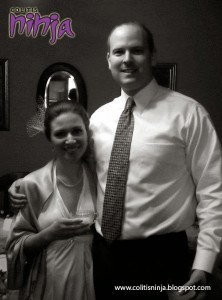 On Thursday (October 23rd), we celebrated our three year wedding anniversary! This man has nerves of steel and the biggest heart. I love him and can’t imagine going through life with Ulcerative Colitis without him. Before we were married, he drove three hours during the night (on several occasions) just to be with me and make sure I didn’t have to go to the Emergency Room.

When David and I said our vows THREE years ago, I never realized just how difficult the phrase “in sickness and in health” would be to live out. For nearly the past two years, I have struggled with my health and have had to watch David struggle through caring for me. The sleepless nights of me getting up, running to the bathroom getting sick. The emergency room visits, the hospital stays, the vicious side-effects (you know the drill). For me, the most difficult part was not being able to hold up my end of the bargain–taking care of HIM!

It is true that we have struggled, but if we look back, I think we would both say with all honesty, this struggle was worth it. Because despite the suffering it caused us, we feel as though we’ve grown closer together. We feel as though our faith has grown stronger. Although these past two years of my health have felt like hell warmed over (understatement!), I would do it all over again knowing that David is by my side. He is the most caring, compassionate and loyal person I’ve EVER known.

So why am I sitting here writing out all this ooey-gooey love story garbage? To tell you that although there are a LOT of shallow people out there who will not accept you AND your disease, there are also a lot of amazing people out there who will love you. Bleeding ulcers and all! Don’t give up. Chances are, one day you’ll find your Mr. or Mrs. Right. And, cliche as it may sound, it will all happen when you least expect it.