“Women’s health, aside from cancer, is not on the radar, not part of the conversation.” — Dr Nicholas Leyland, Professor and Chair of the Department of Obstetrics and Gynecology, The Michael G DeGroote School of Medicine, McMaster University

If you’re a woman, you probably have fibroids — non-cancerous growths of the uterus, ranging in size from seedling to cantaloupe, that often appear during childbearing years. By age 50, as many as three out of four of women have fibroids and a third are symptomatic due to bleeding or the effect of the mass on surrounding tissue.

Most women have fibroids, yet no one has heard of them and so when Natasha Fiorino drummed up the courage to tell her boss about why she would need some time off, it became like that telephone game we played as kids: word got around and people thought she had a thyroid problem. But Natasha’s boss understood and supported her, proving that talking about fibroids (not thyroid) works.

“If fibroids were a male problem, we would have resolved it a long time ago.” — Dr Nicholas Leyland

Let’s take Doctor Leyland’s words and do something completely different with them. Let’s imagine female fibroids as a male problem. A male problem called guybroids.

Guybroids cause men to bleed heavily from the penis day and night. There are masculine hygiene products designed to “superabsorb” the blood, but some guybroid sufferers bleed so heavily that they have to be replaced every couple of hours. In commercials for Protex, a popular masculine hygiene product, blood is coloured bright blue because penile bleeding is taboo. Nobody wants to talk about it and nobody wants to see it.

Although not life-threatening, guybroids destroy the quality of a sufferer’s life. Bleeding can become so severe that it leads to multiple emergency room visits and random gushes of blood can turn normal activities into abnormal exercises in escape art.

Work, sex, a golf game with the guys — all are profoundly affected as the life of a guybroid sufferer shrinks a little every day the bleeding continues. The anemia that accompanies prolonged blood loss often leaves a man so weak that he can barely think.

It takes forever to get treatment for guybroids — over a year to get an appointment with a specialist due to a shortage of guynecologists because proctology pays better. The favoured treatment for guybroids is sterilization performed via the abdominal route. Many men don’t want to be sterilized especially in a way that is so invasive, but because doctors are taught to perform sterilization in this fashion—a practice that goes back centuries — it’s hard to get them to stop. Plus the system incentivizes surgeons to do the wrong thing.

Innovative drugs to treat guybroids are a personal expense for those without a drug plan, therefore treatment is skewed toward “free” surgery. Men are needlessly sterilized when pharmaceutical treatments or removal of the guybroid without sterilization would have been more appropriate because they aren’t fully aware of other options. Guybroids are so debilitating that many sufferers would do ANYTHING to make the bleeding stop, and sterilization is guaranteed to make it stop.

When will we make it stop, ladies? Guybroids is fiction. Fibroids is reality.

Do you think men would stand for a health care system that reacts so slowly to issues that profoundly affect their quality of life, and incentivizes the wrong treatments? Chances are you have fibroids, but are lucky enough to be asymptomatic. What if you started bleeding heavily for days, weeks or months on end? What if your suffering was not part of the woman’s health conversation and you had to wait months or years for treatment? Shouldn’t women’s health embrace issues of quality of life and conditions such as fibroids?

This is not just about fibroids. 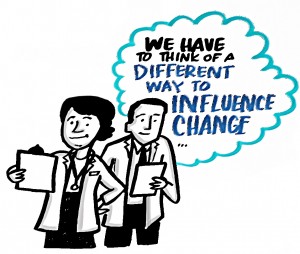 This is about women having a voice. You have a voice and a choice in the treatment of your body and nothing about your health is taboo.

This is about ensuring there is a standard of care that all women have access to—rural and urban. You are ten times more likely to have a hysterectomy if you live in Northern Ontario versus Toronto. This is unacceptable.

This is about women taking charge of their own health. Educate yourself, understand your options and join together with other women to advocate for your health. It is not normal to bleed excessively or to have pain during sex. If you have these symptoms, don’t accept the pain in silence. See your doctor.

It is not weakness that makes women accept the healthcare status quo. It is strength mingled with a noble tendency to put others first that enables women to suffer to the point where procedures such as hysterectomy seem like reasonable options. Culture tells women that their sexual organs are more complicated and disposable than men’s, so too often women accept whatever treatment is presented to them with stoic resolve. It’s a joke that if men had babies, there would be no babies, but the fact is that men don’t suffer suffering. Let’s not suffer our suffering. Let’s take action to improve healthcare for women.