When I began putting together this narrative of my experiences, I had no idea where to start. I was feeling a little lost. Normally I’m very on top of things, I do my readings two weeks ahead of schedule and like to get assignments done a week before they’re due. But for some reason, I found myself procrastinating about working on this. I think it had something to do with the fact that finding words to form a coherent and cohesive discussion about my experiences with mental illness was extremely intimidating and scary. 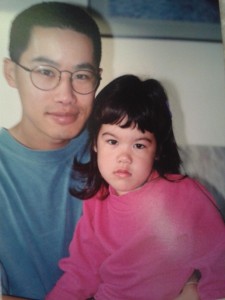 This is me when I’m 3 on my first day of school. Apparently I was NOT happy to be going. Although I didn’t start feeling the symptoms until later in my teens, anxiety is something I’ve been dealing with for as long as I can remember. My parents put me in a bunch of different sports when I was a child and I can remember becoming extremely anxious before a swimming lesson or a softball game, the week leading up to it filled with dread. Reading through report cards from Grade 2, I read comments from my French teacher about how I cried a lot, especially when I made a mistake or couldn’t pick up a new concept fast enough. From an early age I was already showing the signs of perfectionism and anxiety that would lead to the self-doubt and pressure that I put on myself today.

During the summer of 2014 things got really bad. Until this point, the words ‘depression’ and ‘anxiety’ had never been discussed. However, back home in Ottawa, my fatigue, nausea and general blahness reached a point where I called my mom in tears from work. My parents suggested this time that I see a doctor. I went, talked with her, filled in some charts, and was told that my symptoms matched those of people who have depression and anxiety and was prescribed a low dose anti-depressant and was recommended once again to visit a counsellor.

Right now I’d say that though I’m rarely happy for any length of time, my normal emotional state rests somewhere between glum and content, which is a lot better than the yo-yoing I was dealing with before. I don’t feel these symptoms all the time, it depends on what I have going on and the amount of stress I’m experiencing, but it wouldn’t be uncommon for me to experience these at least once a week.

Sometimes some of these will combine so that the gravitational force of my bed seems to increase exponentially and I find myself lying on it, unable to move or think of anything other than how shitty I feel and how I’m a loser for being stuck on my bed. One of my favourite web comics/blogger, Allie Brosh, has created some comics about her experiences with depression that are accurate representations of how I feel sometimes. 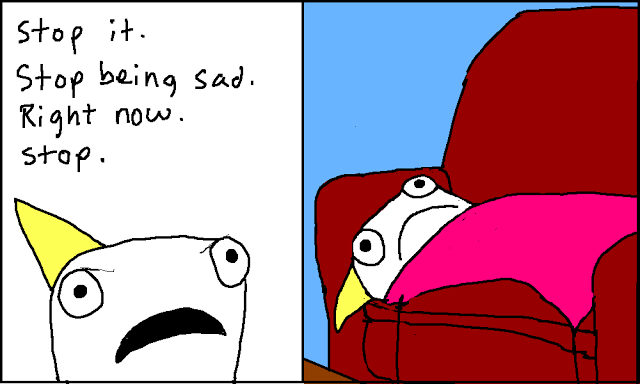 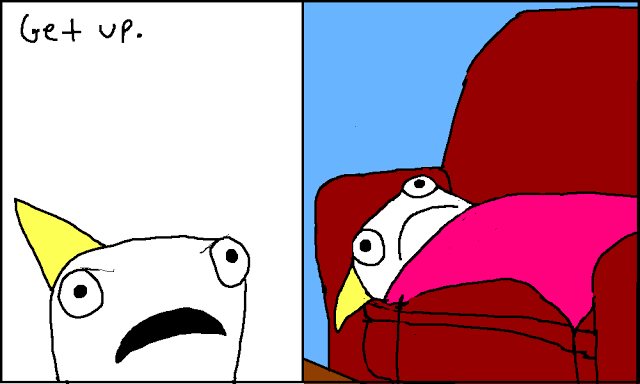 All comics copyright of Allie Brosh

These comics show how sometimes it can be hard to show the appropriate emotions in social situations. Your face kind of just gets stuck and doesn’t want to move. 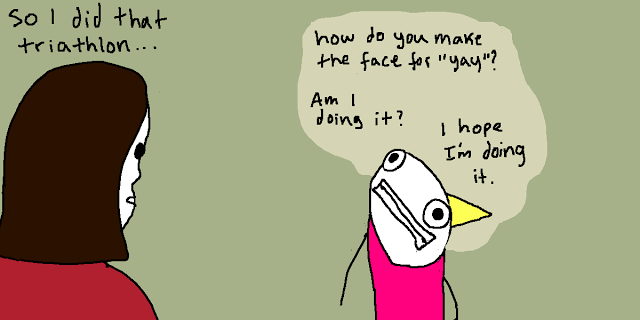 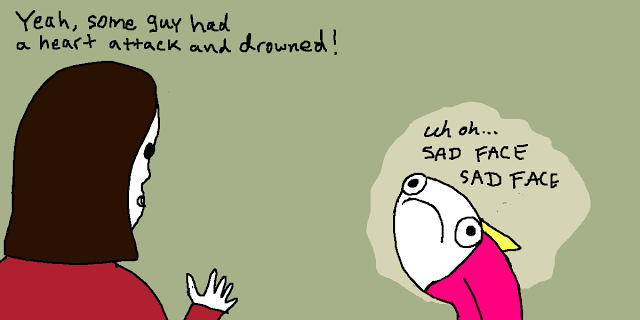 I’ve been taking Cipralex, which is a popular drug for treating depression and anxiety, since August 2014. The pharmacist warned me that it would get worse before it got better and I’m glad that she warned me because the best way I can describe it is riding the Leviathin at Canada’s Wonderland. The emotional ricocheting – waking up happy only to have the smallest event throw me into a state of sadness and depression – was hard to deal with but thankfully it’s evened itself out. Now that I’ve been on the medication for close to a year and have been visiting regularly with a counselor, I want to begin weaning myself off it.

Animals (especially cute furry ones like cats), my family, going riding (that’s Bobby), and being with my friends are all things that help me to try and stay in the moment and eek little bits of happiness out of them.

From a patient’s perspective, I wish that doctors weren’t so quick to prescribe medications and I wish that they would more readily offer holistic options like meditation or anxiety workshops.

Stigma is another huge issue, fear of it has kept me quiet about my experience for months, afraid to mention it to my housemates or family in case they were to judge me or treat me differently. I hate stigma for making it make ME feel like I’m weak, vulnerable, out of control, or somehow at fault for how I feel.

To be honest, I feel frustrated sometimes with people I know, or even family members. If someone with a mental illness does decide to mention it to someone else, you can be sure that it took a lot of deliberation and strength on their part to do so. So when someone reaches out to you, and feels comfortable enough to talk with you, LISTEN!!!!! I know that for me, I just want someone to be there to acknowledge what I’m going through. I’m not expecting you to become my confidante or shrink, I just want you to LISTEN. Telling me to “think more positive, or look on the bright side,” is not helpful! 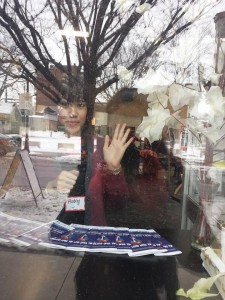 I like this picture because it’s kind of artistic, I feel like the tree’s reflection in the window almost appears as if it’s coming out of my head. It represents all the things going on in my mind. Sometimes one negative thought can branch off and grow and grow. But altogether, these are the things that make me ME. Although you may have to squint a bit to make out my figure behind the window, I am there nonetheless. I’m glad that there are more resources in the community, campaigns such as Bell Let’s Talk Day, as well as celebrities like Clara Hughes who have helped to make mental illness an easier subject to discuss.