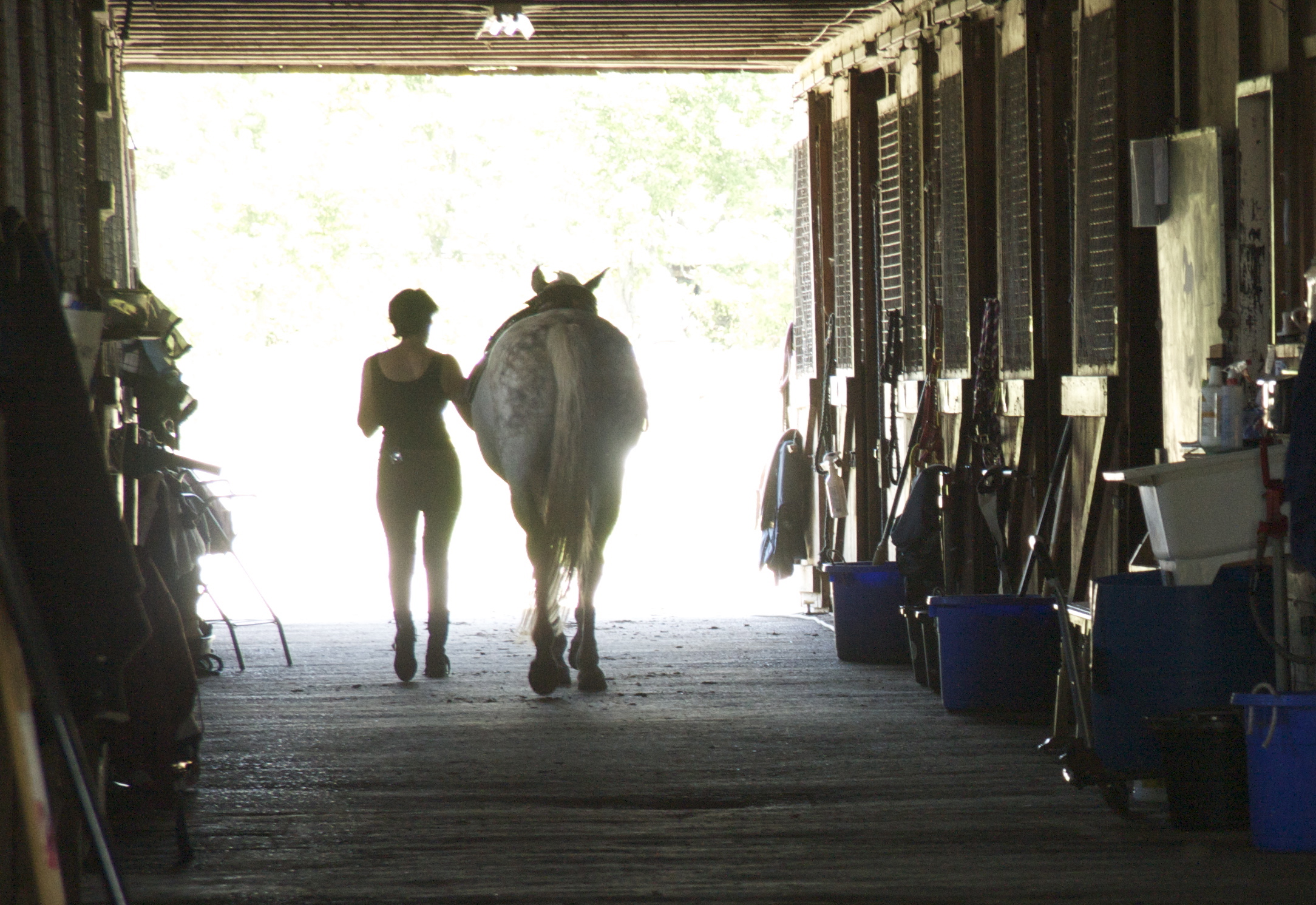 I’ve checked my wireless continuous glucose monitor and adjusted the basal insulin rate on my pump accordingly for the activity level that I anticipate over the next 2 hours. I change from my running shoes into my weathered, muddy barn boots, grab the halter, a lead, a couple of treats and a dressage whip. The sky is silver-gray this morning as I approach the gate to the paddock, and the ground is wet. I call his name and he lifts his big white head and turns it to face me. The rest of him doesn’t move, just that long sinuous neck. He looks at me for a moment and then drops his head and goes back to eating hay from the flake at his feet. Knowing he will not come to me today, I open the gate and set out across the field to him, squishing through a mixture of mud, shit, weeds and straw that is wet from this morning’s rain, sinking to my ankles at every step. You can’t always have what you want when you want it, and sometimes you have to work harder for it.

The smell of barn swells up around me as I make my way across the muck, lifting the lead rope high so that it doesn’t get dirty. I inhale and am happy. It doesn’t take a lot to make you happy. I reach him where he is standing on dry, higher ground and he lifts his head again and turns his face to me, his dark, liquid eyes assessing me, his nostrils expanding as he takes in my scent: Do you have anything for me? He is calm and unhurried. My time means nothing to him. Slow down. Don’t hurry. Be here. Pay attention to details.

There are treats in the barn, I tell him, stroking his long, muscular neck and massaging between his ears, feeling myself slowing to the beat of his heart. I stand next to his head, just in front of his chest and hold up the halter. He puts his face down into it so that I can reach to pull it on over his ears and fasten the cheek snap. If you are gentle and patient, you will make progress.

I speak to him softly of inconsequential things as I snap the lead rope to the ring on the halter and begin to walk back toward the gate. He doesn’t follow, and I reach the end of the lead rope with a jerk. Slow down. Take stock. Be aware of what is happening. I take the few steps back to him and run my hands along his shoulders and back, down his front legs, and up to his face, checking for sore spots or injuries. What’s wrong? I ask. He puts his nose next to the pocket of my jacket, where the treats are hiding. His nostrils open and flex, taking in the scent. Yes, I say. There are treats. You get them when we get to the barn. Come on, I urge, tugging gently on the rope and turning in a different direction this time, not toward the gate, but toward the green, drier terrain across the top of the paddock. This time he follows, nuzzling his nose against the back of my arm. Adjust your expectations. You can’t always get where you want to be by going directly toward it. Be willing to try different paths.

I turn gently at the apex of the field and start a loose semi-circular motion in the general direction of the gate. We step carefully through the deep muck, each of us lifting our legs high between each step: my two, his four. Our feet make sucking sounds as we go. It’s nice to have company on a shitty journey.

Then we are at the gate. I open it and lead him through, then turn to close it behind us to keep the others in, and he turns in a graceful arc, resting his head on my shoulder as I fasten the chain back in place. If you are patient and kind, you won’t be alone.

I turn and pick up the dressage whip where I left it leaning against the fence, anticipating the next step of the game, and sure enough, he plants his feet squarely and refuses to move them, lowering his neck and head towards the pocket with the sweet-smelling treats in it. Just when you think you have control of the situation, you don’t.

I know, I say. Molasses and oats. Yummy. In the barn. I urge him forward, using the whip not to hit, but to tickle feet and legs that I cannot reach when I am trying at the same time to pull him forward with my other hand. He weighs 1200 pounds and I’m about 130. There is no way I can outmuscle him. When physical strength can’t get you where you need to be, you must be creative and persuasive – and determined.

I have to get him to want to do what I want him to do – or at least to agree to it. He stands firm for a moment as I try to be patient and persuasive. I need to be firm and assertive, but not impatient or aggressive, or he will simply refuse. You can’t get angry or impatient and expect cooperation.

At length he begins to move forward in the direction I want him to go as I tickle his belly just behind his front leg and urge forward with the lead rope. I keep talking, promising wonderful things if he comes with me, and praising him for each step. Slow and jerky at first, one step at a time, then more smoothly, we walk down the path toward the barn and the arena. If you stay calm and keep trying, eventually you will make progress. Celebrate every step forward.

I know his ways and he knows mine. We have been doing this for more than ten years, this dance of competing objectives, motivations and desires. Although we both know that he enjoys a brisk rubdown with the curry comb and then a thorough brushing of his coat in smooth, long strokes; that he loves when I preen him and tell him how handsome he is; he will not be rushed into the transition from being in the paddock with his buddies to being in the barn with me. We both know that he doesn’t have to do what I want him to do; that he may agree to it, even enjoy it, but he doesn’t have to do it. If you are patient and persistent, you may achieve what you are trying to achieve.

By the time we get to the barn, we are walking in perfect rhythm, his head low and his neck long and loose. I give him one of the treats from my pocket, and he takes it gently from my hand, using his lips to clean up any crumbs. He munches contentedly as I start to groom him, cleaning the dust and mud from a coat that emerges snowy white underneath. When I was a child, I dreamt of a white, winged horse that came to my bedroom window and whisked me away on his back for nights of adventure among the stars. Ten years ago, I found him, learned at last how to ride and somehow, improbably, he became mine. He has a sense of mischief that puts me firmly in my place when I think I might be in charge of him. This is a partnership, not a dictatorship.

We both love the dance we do together when I sit on his back and he becomes an extension of my body. Then we move as one being, and I am a centaur. I move him by moving myself in very subtle ways: a movement of calf, an opening or closing of fingers, a shifting of weight, a turn of my head. Sometimes, I have only to think of what I want him to do and he does it. Sometimes, I think he can read my mind, other times, only my heart and soul. If I am honest with him, if I am true and present and completely in the moment and only that, he will dance with me and share with me his grace and power.

And I will be healed again; made whole by the strength and beauty, the calm authenticity of this magnificent being who shares his magic with me. The simple, ancient truth of horse and human dancing together as we have done for tens of thousands of years. I may not always be in control, but I can always be part of the dance.

These are the lessons my horse teaches me and if I am willing to learn, they apply equally to my relationship with my chronic medical condition, type 1 diabetes. I may not always be in control, but I can always be part of the dance. Sometimes, I may even lead.