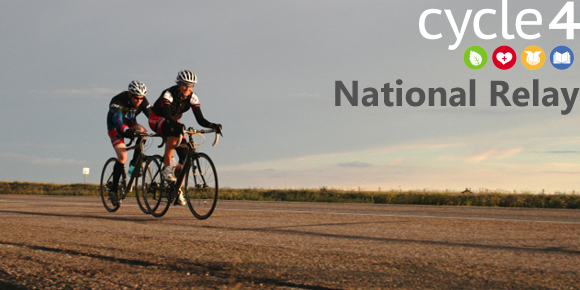 “Two years ago at age nineteen I was diagnosed with type 1 diabetes. Since then, I have immersed myself in anything I could to raise awareness and funds for juvenile diabetes research. My main inspiration in life is to find a cure; when that day comes, I want to know that I was part of it and contributed. I’m prepared to bike, crawl, cart wheel across the country to do so”.

And on August 13, Aryssah did just that.  As a member of the CYCLE4:National Relay team, she kick started a journey across Canada, a distance of almost 7000 kilometres.

Aryssah and the other CYCLE4:National Relay team members will be riding in pairs, symbolizing that great things are always accomplished in ‘tandem’ with others. The relay will wind up in the seaside town of Digby, Nova Scotia on Sunday September 4, 2011 welcomed by 50,000 people as part of the Wharf Rat Rally.

The CYCLE4:National Relay in its inaugural year as the legacy of Cyclebetes and Team H2V – both national cycling relays that began in September 2007.

As a banner program of CYCLE4:Whatmatters, the National Relay allows all riders to raise funds to support the health issues and organizations that matter most to them. Fundraising for Diabetes, Cancer, MS, or Crohn’s Disease is all made possible through the CYCLE4: National Relay – giving patients/advocates like Aryssah, the opportunity to fundraise and increase awareness on a national scale, with a safe, organized event.

Patient Commando applauds CYCLE4:Whatmatters as an organization that bridges health advocacy, inviting collaboration and partnership on a national cycling event.

In support of this event, Patient Commandos Zal Press and Eamonn O’Connell will be meeting the CYCLE4: National Relay as they pass through Toronto on August 26th.  Stay connected with us to find out more: Facebook, and Twitter.