As a child of the 70’s, I like many other girls religiously watched Wonder Women on television. She was beautiful, intelligent, and strong and seemed invincible. I realize now that I have always been drawn to strong women through out my life and my desire to be a Wonder Women.

This past spring I felt a lump in my right breast that simply felt different than others I had felt in the past. I had learned three years prior at 39 that I had fibroids in both breasts and the surgeon stressed the need for me to be diligent about doing self-breast examinations as with dense breasts it could be more challenging to detect a tumor.

Fast-forward through to May 2013, where I underwent two mammograms, an initial ultrasound, followed by an ultrasound guided biopsy of the lump, and then an appointment with the surgeon June 6, to receive the biopsy results. As I sat in the surgeon’s office looking out the window at the pouring rain, he called for my pathology; he hung the phone up and professionally informed me I had a cancerous tumor in my right breast, and that he could book me for surgery June 19. I took a deep breath, and knew the hardest part was opening the door of the surgeon’s office and locking eyes with my husband who sat anxiously in the waiting room. Jon knew immediately by my face that the prognosis was cancer. This was the second time for Jon to receive this jolting news, as he lost his first wife to Colon cancer when she was 42. We were then told that the surgical procedure would be either a lumpectomy or a mastectomy depending on future MRI results. These results then lead us to the final decision to do a right mastectomy and sentinel node biopsy. Here I was 42 thought I was healthy, still felt strong and now had breast cancer. Now what? 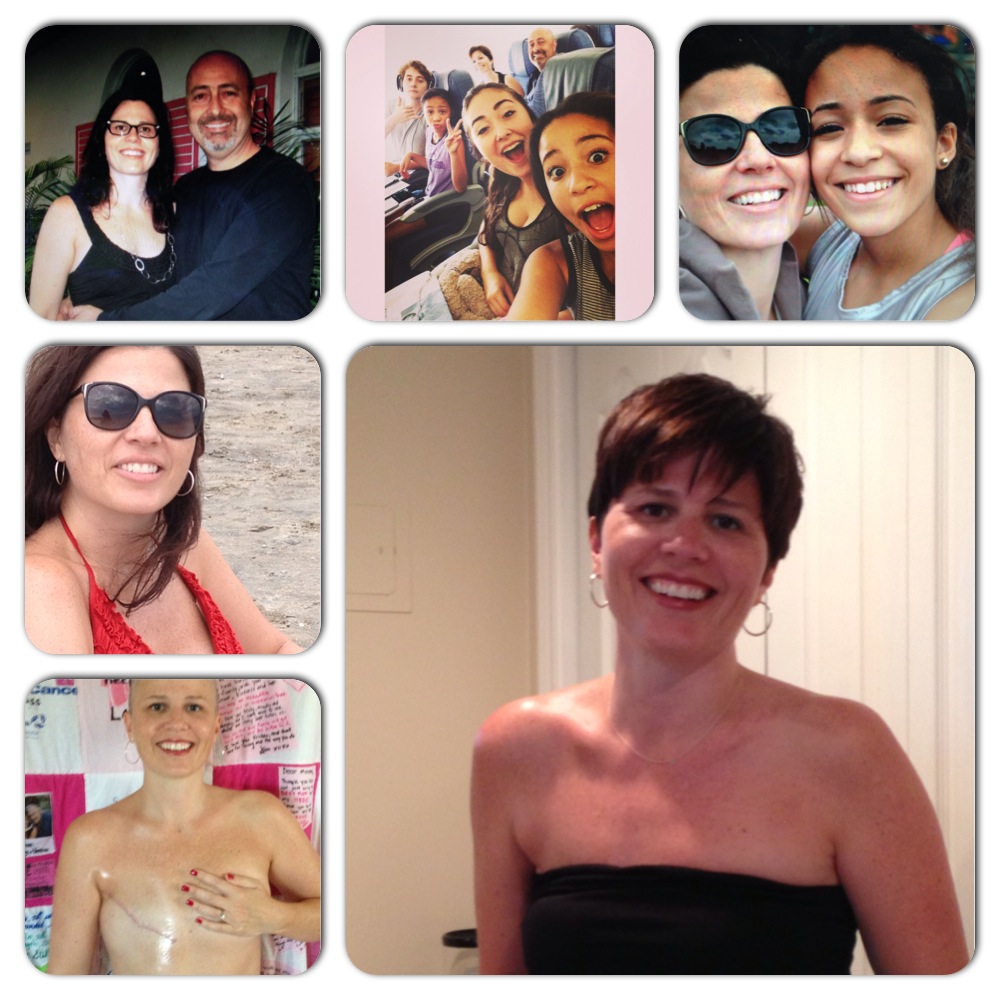 Next steps were to tell our parents and the kids. We decided to wait 4 days to tell the kids as it was dance recital weekend and I didn’t want them worrying about me. June 9th, we had a family meeting where we informed the kids with the support of my mother and stepfather that I had breast cancer. There were tears and some laughter as I told them with a smile that they were stuck with me, and I had no plans of going anywhere. I promised them I would be there for all their weddings and the important events throughout their lives. My husband at dinner that night announced eloquently yet with a Cheshire grin toasted the dinner with “fuck cancer”. The kids giggled and we toasted in unison.

My step kids are now 20 and 17 and my kids are 13 and 11. They have been brilliant through out our journey and I am so happy that I will be able to deliver on my promises I have made to them.

June 19, I had a successful right mastectomy and began Chemotherapy treatment at Hamilton’s Juravinski cancer center August 9. The hardest part was the in between waiting on the pathology after the June surgery. It turned out the one tumor thought to be originally 4cm was in fact 3 smaller tumors, two of the larger tumors were with IDC invasive ductile cancer, luckily one of the most common forms of breast cancer and the smaller 1.1 mm tumor was metastatic carcinoma. My surgeon successfully removed all three tumors, as they were located in the breast tissue. Thankfully the sentinel node, (which in my mind I pictured to be like a traffic cop which could allow the cancer to travel into my bodies lymph node system) was negative.

I received my third round of chemo Sept 19 and have three more rounds to go, which are each every 21 days. If my white blood calls cooperate, which I know they will, my last day of chemo will be November 21. So life will begin to normalize and my cancer treatment will end.

I have learned it is a very personal decision on whether to do reconstructive surgery after a mastectomy, but I am opting to move forward with a prophylactic mastectomy of my left breast and then reconstruction of both breasts. My goal is to begin this process as soon as possible.

I also want to participate in the 2014 Weekend to end Women’s Cancer event where I plan to submit a Fundraising Team entitled “Wonder Women”, comprised of old and new friends and family with the goal of benefiting Princess Margaret cancer research for women’s cancer. I was a walker in 2003 and I look forward to again having two wonderful days that will provide me with a lifetime of memories of laughter and emotional tears.

I am so thankful for all the many Wonder Women who have surrounded me during this journey, friends, family, my Mother, my Sister, my Sister in law, my girls Eden, Zoe and Tasha and my supportive work colleagues and clients. I am so fortunate to have a loving “Village” taking care of my family and me!

Now, I can’t forget the Super Men in my life, my husband who has been there for the late night tears, moments of reflection and his loving touch with hugs, kisses and back massages after my mastectomy. My Dad, Stepdad and my Stepson Josh who have all supported me with love and have been there in their own unique ways, which always makes me smile.

Having Cancer has forced me to look at my life in a whole new way. I have learned to be more in the moment and that I am definitely not invincible. I have learned to allow people to help me and I am proud to say I have joined a club of female Cancer survivors who I know are all beautiful, intelligent and strong “Wonder Women” inside and out.