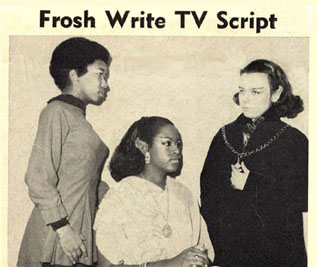 Star Trek‘s premiere in 1966 coincided with my high school years and I, Sally G, have been a fan of Roddenberry’s vision ever since. As a freshman in New York City, two friends and I laboured for months writing a script for the original Star Trek. “Trek Sisters” 1969.

Our script was accepted by Gene Rodenberry (we have his signed receipt!)… just before the whole series was cancelled. Our dreams were shattered but the fan adoration lived on!

I moved to Toronto in 1974 after finishing graduate school and, through my entire career, I found that Star Trek brought people together who perhaps would not normally socialize.

Common ideals and philosophical perspectives crossed over perceived racial, ethnic, gender, religious, age and other social boundaries. I found fellow Trekkies everywhere: in my work and in a tech-focused discussion group I led for nearly a decade on weekend mornings at the McLuhan Coach House in Toronto.

Back in New York, not far from where I had lived in the 1960s in Manhattan, another youngster, named John R. Adler was also inspired by the show. John would be starting his extraordinary medical career at Harvard just a few years after Star Trek was syndicated. In 1987, John would move to California to pursue his goal of making Star Trek‘s medical technology a reality.

In the early 1990s, in Toronto, I was living happily but something happened to me to trigger the growth of a very rare and toxic tumour. Nasopharyngeal Chordoma is a very rare brain-stem tumour, a condition faced by roughly 1 in a million. Little is known about this silent killer, except that there is a genetic component to its transmission. It can exist for years with no symptoms and then suddenly patients can face disability and death.

In 2005, when I was 55, I noticed some difficulty breathing at night and I suspected that an allergy was to blame. After seeing an allergist, I was rushed to Sunnybrook. In December of 2005, a medical team at Sunnybrook sent me home with a lifespan of 2-6 months and the name, Naso-pharyngeal Chordoma, for which there was a 30% cure rate, no approved drugs, little research and a 7-year average survival. Then, in February of 2006, surgery became an option. Following the 15-hour surgery at Sunnybrook, a newer medical technology was used to attack the tumour. A targeted “laser knife” was deployed to eradicate more of the remaining tumour tissue still wrapped around vital organs. This type of radiation is delivered by a laser knife device or “cyber knife”, which was invented by John R. Adler, MD. Today, Dr. Adler is emeritus professor of neurosurgery at Stanford University and he still attributes his inspiration to Star Trek. With all due respect to my wonderful Sunnybrook team, I can safely say that Star Trek saved my life. 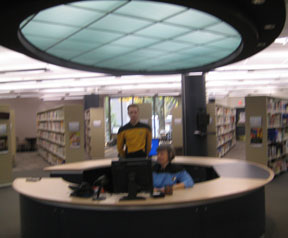 The tumour still lives, but has been abated. Nasopharyngeal Chordoma does not usually migrate as other cancers do: it sits contentedly in one place and grows very slowly. Within months of the surgery and radiation, I found employment and was reunited with Library co-workers who shared an interest in Star Trek. In fact, the Library’s reference desk harkens back to Star Trek’s transporter (as shown to the right on Halloween, 2009, when we wore Star Trek uniforms). 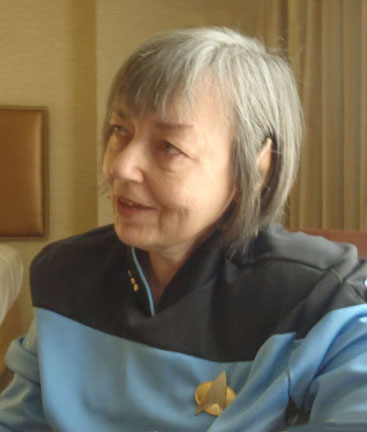 No matter how many galaxies I may traverse, the illness follows. A mishap during the 2006 surgery necessitated another short surgical intervention in 2010. Along the way, I appeared in medical journals¹ and I celebrated my 60th birthday at the 45th anniversary Star Trek Convention in Las Vegas in 2011, where my story first surfaced. William Shatner filmed me speaking about my medical adventures as input to his documentary on Star Trek fans. My footage did not make the final cut for “Get a Life – Fan Addicts,” but it did allow me an hour chatting with William Shatner! 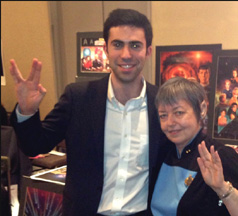 In 2013, a wonderful coincidence brought me together with Josh Sommer, Executive Director of the Chordoma Foundation, at the Chicago Star Trek Convention. He had been a freshman at Duke University when he was diagnosed. Spurred on to conquer chordoma, he has succeeded for himself and he has devoted his life to helping the rest of us to survive.

Some say that I approach my 8th year of surviving chordoma without any pain, no medications and few symptoms because of my vegan diet. Although chordoma cells seek out protein, I am not sure there is much medical evidence to support this claim.² Diet, exercise and optimism are often the best defence against any illness. “Live long and prosper!”

² “The Associations of Diet with Serum Insulin-like Growth Factor I and Its Main Binding Proteins in 292 Women Meat-Eaters, Vegetarians, and Vegans,” Cancer Epidemiology Biomarkers Prevention, November 2002 11; 1441.