This week I’ve taken on the task of visualizing my own medical history and symptoms, in hopes of making the most of my appointment with a new doctor. Below is the full story (and visualizations are at the bottom).

My medical story: the background 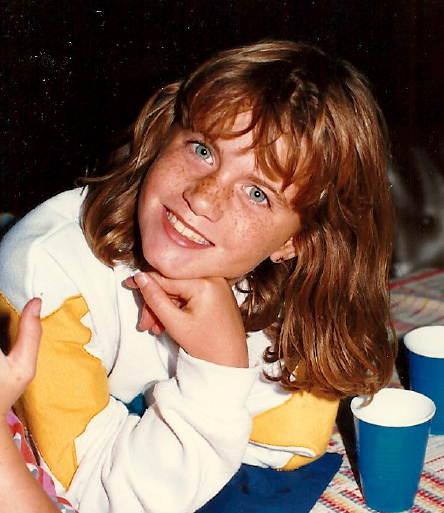 BEFORE: Me, circa late 80s, with full smile functionality

AFTER: this picture is so awesome in so, so many ways. My family, circa 1993; I am the one in the top middle, with poor smiling power.

One early winter day when I was 13, I was sitting at the dinner table with my family laughing at something my brother had said.  My mom stared at me and asked why I was making that face.  “What face?” I said. She said my smile looked different, like a grimace. I ran to look in the mirror in the bathroom. I looked into the mirror and smiled back at myself, but it was like the corners of my mouth wouldn’t stretch to the sides. I looked more like a dog baring its teeth.

Such began my voyage with the auto-immune disease, Myasthenia Gravis. This non-degenerative disease causes muscle weakness, mostly in voluntary muscles, and often affecting facial muscles like the eyes or mouth. No one really knows why, but MG often affects older folks and girls around the age of puberty. Fortunately for me, I was diagnosed very quickly and soon had my thymus gland removed, which improves the long-term outlook for patients.

Over time, I went to college, studied abroad, was a ski bum in Big Sky, MT, lived in Vermont for six years, went back to grad school, interned in silicon valley, and eventually ended up working for the digital agency R/GA in NYC. During those full and exciting years, my MG was mostly under control, though I had a few serious flare-ups that caused complete double vision. When that happened, I had to spike my dose of the immunosuppressant corticosteriod drug, Prednisone, to bring my immune system back under control; and then I’d have to taper back down over a few weeks or months to my regular dose. 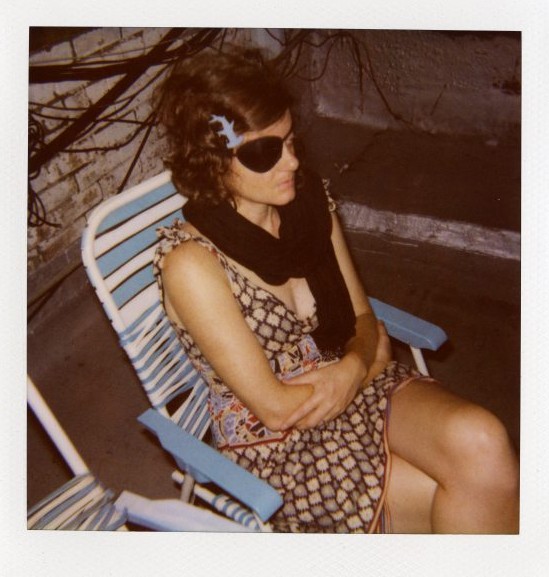 Prednisone, you are a harsh mistress. Over our 14 year relationship, this drug has helped me maintain a very active and normal life. It’s allowed me to hike some big mountains, ski some dangerous peaks, travel around europe, survive grad school, and work some long days at my job (which I love). But it’s also sucked the density out of my bones (at 31 I had osteopenia, which is pre-osteoporosis) and for the past 5 years I’ve dealt with sometimes crippling digestive issues caused by so many years of suppressing my immune system.

I started trying to deal with my digestive problems starting in the fall of 2008. Since then, I’ve seen 4 gastroenterologists and have taken about 7 or 8 courses of antibiotics, none of which has permanently ameliorated my symptoms.  Last year, I started having chest pain/heart palpitations and joint pain, which seemed very associated with my stomach symptoms. The doctors I talked to didn’t seem to believe me when I said that it seemed like the problems in my gut were causing these other symptoms. But no one could explain why, when my stomach was good, these symptoms went away.

Unfortunately, I think that by taking so many antibiotics over the past few years, I have thrown my body chemistry way out of balance. I believe that I have systemic candidiasis that is causing my joint pain, heart pain, tingly legs, and other sordid symptoms. I’ve reached these conclusions mostly through extensive googling, but this week I’m going to a new doctor who has a more holistic approach.

How to communicate this story to my new doc?

The new doctor I’m going to see supposedly at one time dealt with his own medical problems stemming from long-term Prednisone use. He is an MD but does not take insurance, so if I end up seeing him regularly I may end up spending thousands of dollars on him. It is therefore utterly imperative that I maximize my time with him and ensure that he unequivocally grasps my entire story.

Here’s how this would usually work. I’d fill out some paperwork, maybe send some medical records. Then I’d come in for the office visit and, over a half hour or so of my rambling and his questions, I’d be able to communicate an approximation of my medical history. But I might forget a few things here, underemphasize a few things there. He would get a somewhat blurry picture of my past health.

This time I’m doing something different. I believe that this time, the best way to communicate my story will be in pictures and graphics.

Let me explain. I work as an interaction designer; this means, in a nutshell, that I make interfaces (like websites or mobile applications) more intuitive and enjoyable to use. It is my job, and my passion, to simplify the complex; to make navigation systems make sense; to help ensure that complex systems and processes feel ordered and logical. I know that to solve a problem, you must first understand it. I’ve found in my work that visualizing a problem is usually the best way to understand it.

So for this week’s office visit, I have prepared a visual timeline, an infographic, if you will, that I will print and take with me to my visit.  This timeline charts the progress of my Myasthenia Gravis since I was 13 – not only the hard facts like the medications I was taking at the time, but the way I *felt* during those times and the degree of weakness I was experiencing. Overlaid is the progression of my stomach problems over my lifetime, including the points in time when I took antibiotics. Laying these waveform-like patterns on top of one another reveals that often my MG and my stomach problems were involved in a dance of sorts, taking steep dives simultaneously. 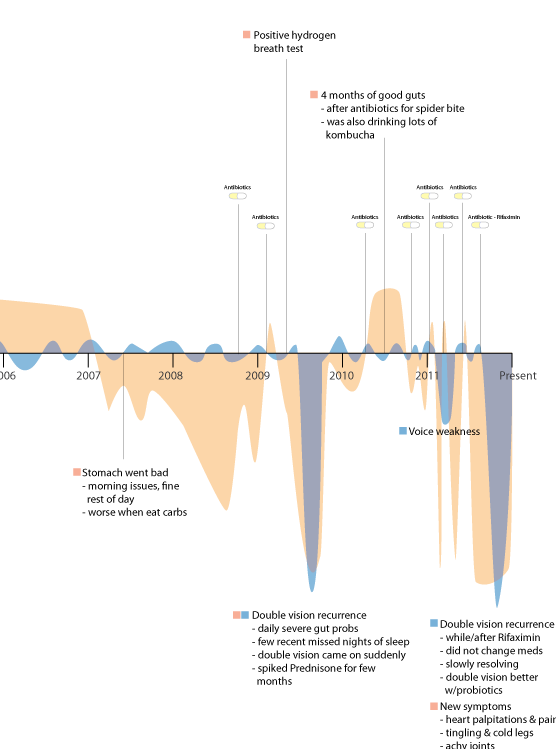 These past few years have been especially interesting!

The whole timeline – click and enlarge for the full experience

I’ve prepared this graph from memory only. I don’t currently have possession of my medical records, but I would like to get them and create a real, scientific representation of my medical history – overlaid with how I was doing over that time period.

I’ve also created a simple chart that lists my symptoms and the way I feel when I feel ‘Good,’ ‘Medium,’ and ‘Bad.’ This was a way of helping me exhaustively list and catalogue my symptoms, so I won’t forget anything at the visit. 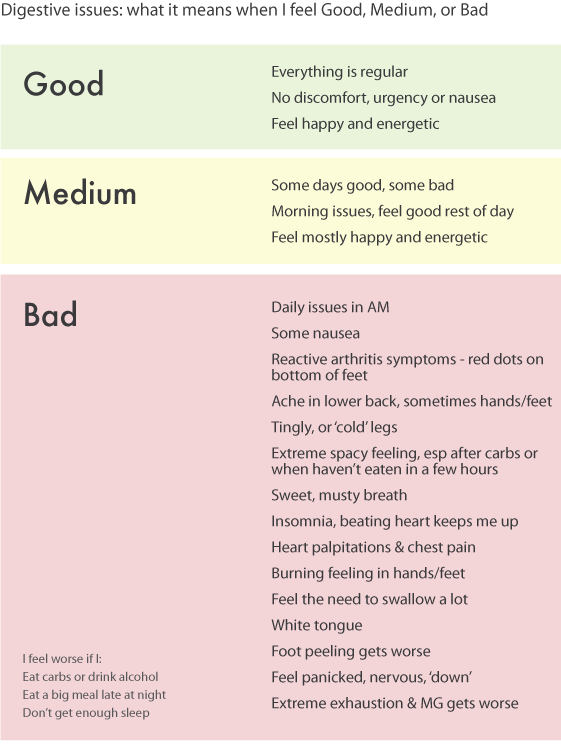 Visualizing information is one of my great passions, as is designing digital solutions to improve healthcare. By merging those two passions to try to solve my own medical mystery, I feel as though I’ve stumbled upon something that has the potential to help patients and doctors communicate more efficiently, and that could help doctors connect the dots for patients who have lots of mysterious symptoms or who see a bunch of different doctors. I don’t necessarily see this as a Personal Health Record, but more of a companion graphic that can be read and understood quickly and efficiently.

So, who should generate such a graphic? As things stand right now, I think the responsibility has to fall on the patient or the patient’s caregiver, as health data is not currently in the condition or format to be imported into a tool and dynamically made into a legible, relevant chart.  The question remains – can we create a tool expressly for visualizing personal medical histories, one that accounts for both ‘hard’ data points like medication dosages and procedures performed along with ‘soft’ data points like how the patient felt (physically and mentally/emotionally)? I think this is a design problem worth pursuing.

For whoever may be interested, I will update here after I’ve visited my new doctor this week and gotten his feedback.

Katie has lived for over 20 years with an autoimmune disease called Myasthenia Gravis. She applies her expertise as a User Experience (UX) Designer to help improve healthcare. “I especially am interested in trying to solve problems that are relevant to me as a patient. By finding solutions for my own problems, I hope to improve the lives of other patients like me.” . Follow her blog [sensical], her professional website or on Twitter @katiemccurdy.