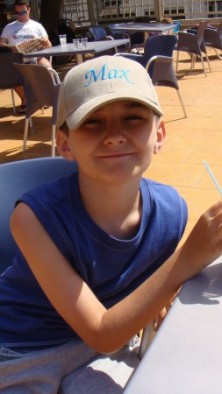 My story is about my son Max who is now 12 years old and has Asperger’s Syndrome.

Max was born a healthy 7lbs 10oz in the hot summer of 1999. From day one he was an easy baby. Always happy and placid and rarely cried or threw tantrums. I counted myself very lucky to have such a content child. Max was walking by 11 months old and was ahead of other children with his talking too. I was not worried about his development or behaviour in any way.

Coming up to Max’s second birthday I had been shopping for his party, which was arranged for the coming weekend and bumped into some good friends whilst shopping. Us girls started chatting, Max was sitting in his buggy and my friends daughter who was about 4 years old began talking to Max and took an interest in a small toy he was holding. She took the toy from him to have a better look, with this ensued an almighty scene. Max began to scream and thrash around in his buggy. My friends and I stood in shock, they asked me if he had ever behaved this way before and I assured them he had not. I was as taken aback by this behaviour as they were as I had never seen this sort of behaviour from Max before. Max finally settled down back at home and I put the incident down to a one off.

Sadly it was not a one off and every single day thereafter Max’s behaviour became more and more volatile, he would scream, shout, hit, bite, spit and curse. Unfortunately his older sister Rosie usually bore the brunt of it.

I thought his behaviour must be my fault or the fact that he did not have a father figure around as Max’s father and I separated when Max was 1 year old. I began seeing my Health Visitor on a 3 monthly basis (on my insistence) as I was increasingly worried by his outbursts. I was assured his behaviour, although extreme was not uncommon and it was put down to the terrible twos etc.

So it was just something I had to live with and hope would pass, but as time went on, nothing changed and things went from bad to worse. I reached a point where I was virtually a recluse, I hated taking max out shopping, to the park, visiting friends as every time I did a terrible episode would occur and I would feel embarrassed and humiliated. People would stare at us and comment under their breaths and I would always go home in tears. It was far easier to just stay at home which is what I did to avoid such scenes.

By the time Max started primary school, his behaviour had settled a bit and things seemed to be improving. He had a good first year in his reception class and my anxiety and worries were starting to fade. However in class 1 things suddenly erupted again and I was constantly being called in to the school about Max’s behaviour. It got so bad that Max was constantly on fixed term exclusions, he was excluded from all school trips etc and it got to the point where the school were phoning every day for me to collect him. It was a miracle if he ever made it to 3.20pm when the school day ended!

The school suggested I take Max to see specialists and said they could refer him. I agreed and so began a two year fight to get Max a statement of special needs and a diagnosis.

We saw so many different people from child physiologists to paediatricians to dieticians. Who at first all agreed there was not a problem! Along with the school, I contested this and insisted on a second verdict, so again I had the numerous appointments etc. Then in May 2006 just short of Max’s 7th birthday he was given a diagnosis of Asperger’s Syndrome. I didn’t know whether to laugh or cry, it was a relief and a shock at the same time. I remember I couldn’t stop cuddling him for weeks after as I had always put his bad behaviour down to him just being naughty. But it turned out he has serious hearing and sensory issues and often lashes out because of loud noises or something as simple as people brushing past him. 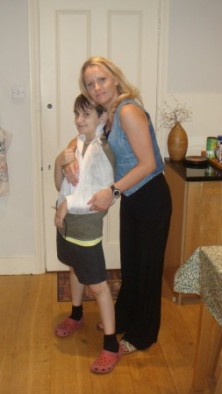 Max is 12 now and things are better than they have ever been, it’s been a long hard road but I feel like we are finally getting there. He is now in a special school for Children with Autism/Asperger’s and is getting on relatively well. He attended 3 different primary schools in the end as none could cope with his behaviour, even though 2 of those schools were units for children with Asperger’s! He also spent 11 months at home with a tutor for just 2 hours a day as my local authority could not find a school suitable for him. Max now attends a school 23 miles from my home as this is the nearest school that can provide Max with the education and management of his needs.

People’s awareness of autism is gradually improving. When Max was diagnosed with Asperger’s syndrome almost everyone I spoke to had never heard of it. Most people have at least heard of it now and those who have experience can tell within minutes that Max has it, whereas others will judge some of his behaviour as just odd.

Not all disabilities are obvious and I wish people would take a moment to consider a seemingly naughty child for a moment before making assumptions.

Max is a lovely boy and I am so very proud of him. He battles with his sensory issues every day – certain textures of clothing, shoes never feel right and sudden noises affect him. But he manages to cope with these things a lot better the older he gets. And although he is behind in his reading and hand writing at school, he excels in subjects like science and is an amazing artist! He is also very funny and has a great sense of humour, and often has people in fits of laughter! And his vocabulary is like that of an Oxford Graduate! He uses words I’ve never heard of!

This article first appeared in Disability Horizons, dedicated to creating a positive, interesting and useful disability related magazine with articles and resources to help disabled people achieve whatever they wish.