My experience with cancer pushed me to make “consumer-driven” actually mean something in the healthcare industry.

I’m a 42 year-old woman who has always been in good health. In April of ‘08, I started getting cramps in my stomach. They persisted for several weeks and occasionally were accompanied by sharp pains. This was unusual for my body. While on vacation, I admitted myself into a hospital emergency room (ER). The ER did blood work, a CT-scan, and an MRI, and said there was nothing seriously wrong. I just had a urinary tract infection (UTI) and a small cyst on my ovary that the doctor explained would go away on its own. The doctor prescribed medicine for the UTI and advised me to check in with my OB/GYN in a few months for a checkup.

What surprised me about the whole experience was that the clinical system seemed to dismiss my concern. As a woman who knows her own body, I was telling them something was wrong, but they told me I was overreacting. They were incredibly nonchalant and explained that female bodies were always changing due to hormones or menopause, that it can be hard for women to accept aging, and that my physical problem was probably a psychological one.

However, the cramps were still persistent. When we got home, I made an appointment with my general practitioner, thinking perhaps I had an ulcer or some other stomach issue and would be referred to a gastroenterologist. I was diagnosed as having Irritable Bowel Syndrome. But again, the diet changes and medicine did not alleviate the symptoms. I went for a follow-up to my OB/GYN where, with a transvaginal ultrasound, they found that the cyst had grown and scheduled me for laparoscopy. They said it was a simple procedure—nothing to worry about.

Before the surgery, I spoke to several other women who also had cysts and needed the procedure. What concerned me was that my symptoms seemed more severe than theirs. Was I misdiagnosed again? I called my doctor to share my concern, and it was on that call that I found out it wasn’t a common cyst at all. I had advanced ovarian cancer that had spread throughout my abdomen to my pancreas, stomach, and liver in a little over two months. Because it had spread so rapidly and deeply, I started chemo the next day.

I was devastated and shocked. I couldn’t believe that a woman who had been in the business of healthcare for 20 years, had earned an MBA from a top-tier school, and lived in a city with some of the best doctors in the world could have this happen to her. Where was the transparency in the system to make decisions? Why wasn’t the information available so that I could understand it and potentially act as my own advocate? How much experience did my caregivers actually have with the disease, and if they couldn’t diagnose it, how were they going to treat it? If I couldn’t navigate the system with all the education and experience that I had, what would other women possibly be able to do?

The day after I was diagnosed, I was put on Taxol™ and Paraplatin™, a treatment routine that has not changed substantially in 40 years and, although I didn’t know it at the time, wasn’t going to work. My doctor gave credence to the stamp of FDA approval as proof that the drug would give me the best chance at a cure. However, the reality is that most FDA-approved cancer drugs benefit only 20 to 25 percent of patients—and in my case the odds were worse. My particular genetic mutation, called BRCA1, is expressed in the cells of breast and other tissue, where it helps repair damaged DNA, or destroys cells if DNA cannot be repaired. If BRCA1 itself is damaged, damaged DNA is not repaired properly, which increases the risk for cancer.

So, by the end of six months of weekly chemotherapy, I was so drained that I couldn’t get out of bed, and I was no closer to an actual cure. Even more frightening was that after the treatment failed, my doctor still had no clear insight to determine which chemotherapy would enable a cure. He had no insight into my tumor genetics, which left him unable to personalize my treatment in any way. For ovarian cancer today, if there is no response to the drug, physicians experiment with different agents in hopes that one will be effective. This “trial and error” approach is not only random and ineffective, but incredibly difficult for women experiencing the dramatic emotional and physical tolls chemo and after-chemo take on a body. 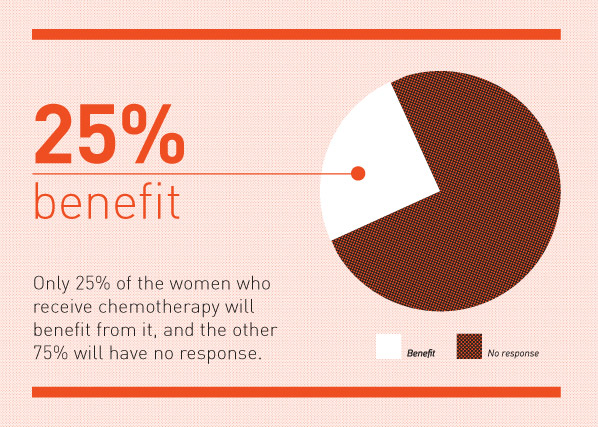 This is where my journey took an amazing turn that most women’s won’t. A friend introduced me to Dr. Laura Shawver, a leading cancer researcher who founded Clearity, a non-profit foundation dedicated to finding genetic cures for women’s cancer. She ran a genetic profile of my tumor and recommended a revised course of treatment that took into consideration my BRCA1 and tumor specifics. Because I actually began to understand why we were going down a particular treatment path and how that could change my outcome, I felt hopeful for the first time in over a year. I finally felt empowered and more in control of my fight. After surgery, I went onto a second course of treatment of Gemzar and Cisplatin, and was finally able to achieve remission after six months. I had a chance at life again.

Treating cancer with a one-size-fits-all approach is doomed to fail. As both a patient and patient advocate, I am appalled that diagnostic technologies are not routinely used to improve the likelihood of responses and and thus overall patient care. No two cancers are the same, and patients need to know that there are often several choices of chemotherapy or drug combinations with different mechanisms of action for their particular cancer. This is especially true for cancer that recurs after primary treatment, when tests can be used to select and prioritize the drugs with the best chance of success. There are thousands of ovarian patients who do not receive personalized diagnostic testing and, as a result, suffer toxic side effects without therapeutic benefit or die because they are treated with drugs that are not effective for their cancer type.

The research and clinical work being conducted to illuminate opportunities for personalized cancer treatment are not perfect, but in most cases are a vast improvement over choosing therapeutic options in the dark.

There are several examples of the successful use of genomic profiling in cancer treatment. The American Society of Clinical Oncology, for example, recently issued a provisional clinical opinion supporting testing in patients with lung cancer. The statement examined lung cancer clinical trials and found that when the cancer was treated with targeted therapies, patients had higher response rates, longer profession-free survival periods, less toxicity, improved system control, improved quality of life, and greater convenience.

While I’ve always been in the healthcare innovation industry, my newest passion (and probably my life’s work) is to change the cancer treatment paradigm. I currently sit on the board of Clearity Foundation, where I work to empower patients with information and revive hope and optimism around the journey—an outlook too many women lose in the face of unbeatable odds. We provide validated genomic profiling tests and work with patients and physicians to guide cancer therapy so that precious time is not wasted on trial and error.

Too much intellect and creativity is lost when a woman dies of ovarian cancer. When healthcare is depersonalized, we lose a whole generation of women who don’t survive to share their gifts. As consumers, we need to be outraged by the lack of transparency and personalization in the system, and we need to strive to transform healthcare. We need to make “consumer-driven” actually mean something and demand the information and tools that act as advocates for our health and wellbeing.

How can you be your own advocate?

Aimee Jungman is the vice president of healthcare at frog.