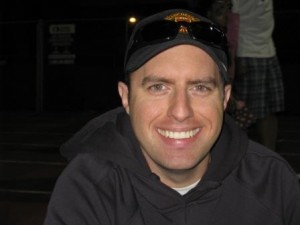 Imagine that you have to tell your young son that he cannot play hockey with his friends. This son may be around nine or ten years old, and his friends have told him that the hockey they play is non-contact. Imagine how hard it would be to tell your son that he cannot play organized hockey, our national past time, because of a medical condition where an awkward fall into the boards or a fall on a shift could be life-threatening.

I have a bleeding disorder known as hemophilia. My blood lacks a certain protein in the clotting process, Factor VIII, and I need to take this replacement factor intravenously whenever I experience internal bleeding. My medical condition does not allow me to play any intensely physical sports like hockey or football.

When I was around ten, one of my good friends told me about the non-contact hockey league he played in, and I tried to convince my parents to enroll me in the coming fall. Both of my parents told me that they did not think it would be a good idea, but, being a ten year old, I pleaded with them to enroll me. “But it’s non-contact!” I would say. My dad suggested that the next time I go to see my hematologist I ask him and see what he says. Well, that seemed to pacify me temporarily.

So on my next visit to the doctor, I mention this to him. He tried to explain to me how it wasn’t a good idea…it took him an hour and a half to talk me down! Maybe it was me being stubborn, maybe it was the fact that I wanted to do what my friends were doing…I don’t know. Even though I was not able to play organized ice hockey, there were plenty of sporting options for me to enroll in. In the summer I played baseball, cycled, and played road hockey with my friends. In the winter I cross-country skied and played shinny hockey on the pond. Throughout the year I took swimming lessons and karate lessons. As I got older, I found other activities that were low-impact, but just as fun. As an adult I play golf and cycle in the summer, curl in the winter and swim year-round. I even participate in the Ride for Heart in Toronto every June (this year I finished in a personal best time!).

What I have learned is that even though I cannot participate in certain activities, I do not let my hemophilia hold me back. I know what my limits are, and try to give back to the community as much as I can. Parents of newly diagnosed hemophiliacs (mainly young children) are concerned that their hemophiliac child will have a limited lifespan, but I reassure these parents that their child can live a very long and healthy lifestyle. There are so many people that are worse off than I am, so I look at life with a glass-half-full perspective. And with the medical advances in treatment, I am confident that a cure is not far away. No hockey? No problem!

Dave currently serves as the President and Chair of the Toronto and Central Ontario Region Hemophilia Society’s (TCOR) Board of Directors and the Vice President of Hemophilia Ontario. He graduated in 2009 from the MBA program at Saint Mary’s University in Halifax and in 2003 with a Bachelor of Arts in Economics from York University in Toronto. In addition to his work with the Canadian Hemophilia Society and the time he spends with family and friends, he enjoys giving back to causes he feels strongly about, including the Heart and Stroke Foundation and the Canadian Breast Cancer Society.