These Are My Scars 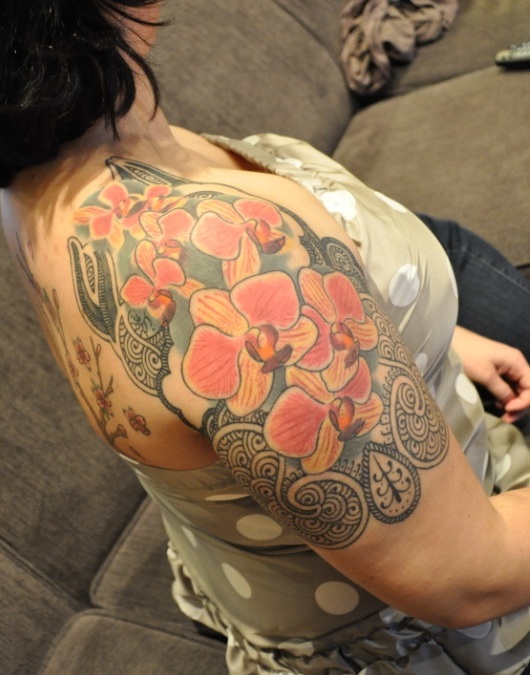 There are a few words I thought I’d never utter together, Tattoos and Therapy are an example, mind you “I have cancer” is another! You might wonder how inflicting pain on one’s self could be seen as therapeutic, but I swear to you it is. The pain is temporary, what stays behind is a permanent reminder, much like a scar. Before actually getting tattooed, I did try conventional therapy, it worked for a while, but was somewhat unsatisfying, but I’m jumping the gun!! We really should start at the beginning.

My name is Anne Marie and I am living with stage 4 Lung Cancer, my story starts in 2009 when I was diagnosed with stage 3a Adenocarcinoma of the right lung. This was a shocker because at the time I was a healthy 30 year old that had never smoked!! I received treatment almost immediately (Chemo-radiation, surgery followed by high dose chemo); six months later I was done. All this seemed to have worked until 2011 when it was determined that like the cat, the cancer came back. This time, it was in both lungs and in multiple lobes and my options were far fewer, so how did I deal? Tattoos!! Let me explain.

During treatment I was so focused on just staying alive and getting through it, I never gave any thought to how I would be affected by the after effects of treatment, including surgery. After my Lobectomy, I was left with a large red J shaped scar on my back and side, it looked like a zipper if you included the staple marks, and I hated it! It reminded me of all the crap and fear that I was feeling. I hated it because when people saw it they’d ask me to re-live the story behind it, I got tired of explaining, tired of the question “did you smoke?” and tired of lying that I was “fine” when really I was a mess. All I really wanted to do was bury what had happened. 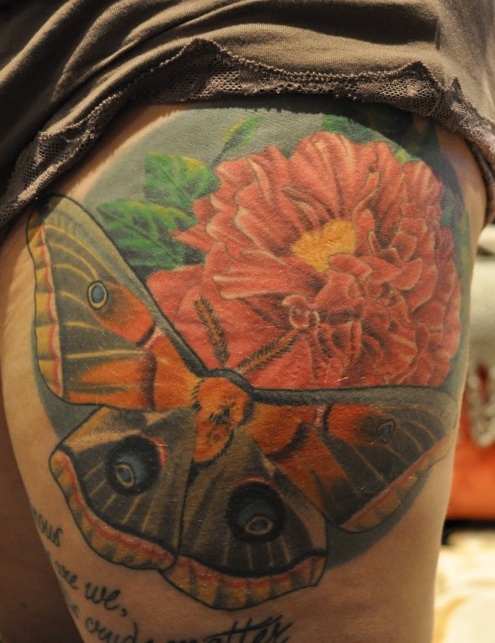 As treatment ended, the emotional fallout began and I slowly became a highly functioning basket case. To look at me I was normal, but inside I was an unmitigated mess, barely holding it together, and I was becoming exhausted keeping up the front. The more the Doctors told me I was fine, the worse my anxiety got, until it happened. The other shoe dropped and the news I was afraid of was true, the cancer was back. The knowledge of which was both terrifying and liberating at the same time. Liberating in that accepting my mortality allowed me to choose not to comply with societal expectations of normalcy since I would never be normal again. I thought to hell with conventional beauty, I’m doing what I want, and so began my tattoo odyssey. It started at the wrists, then the shoulder, lower back and hip, all the while I was dying to tattoo over my scar. I still hated it! I would hide it, and cover it up; I would make it something beautiful!

The strange thing was that as time passed, I continued to tattoo, but I held off on that piece, I’m not sure what I was waiting for. Maybe I was waiting for acceptance, that this thing was part of me and shouldn’t be covered. Maybe If I covered my scar, it would be like denying what happened, the good and bad…but a lot of what I found was goodness, yes cancer sucks, I can’t deny that. I wish no one ever had to get that news, but we do, and it stinks! Without it though, I wouldn’t have met some of the most amazing and inspiring people, or have realized that life is so much more than what I was living! As that realization washed over me, I found that I could deal with my reality; the thing was I didn’t even know that I had realized it yet! Until one day I found myself talking to my tattoo artist about my back piece and how I wanted it to be, describing the image I wanted painted and then I said it, “you have creative license, but don’t cover the scar!” What!? Had I lost my marbles! 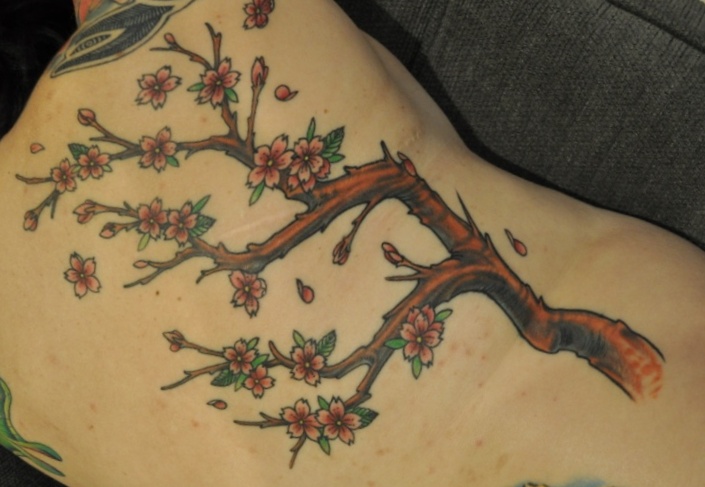 It’s strange that people will say “you’ve scarred me” or “I’m scarred” because it always has such a negative connotation. I’ll admit to buying into the negativity, after all it’s something that happens to you. No one really chooses to become scarred.

It wasn’t until I was having coffee with a dear friend and fellow cancer ass kicker that the catharsis hit me in its entirety. We began talking about tattoos and how they could tell a story, I was explaining how I felt about my scars, when he told me about his, and I couldn’t believe it, he was a virtual road map of surgical storytelling. Knowing about his story, where he had been and what he had gone through to survive made his scars beautiful! Mine too.

What I discovered was that I never gave myself credit for enduring, because I was always thinking there was someone worse off. I was ashamed that I had come through fairly unscathed compared to others, I felt guilty. As my scars faded, I think the guilt did too. I have to admit that I’m a bit sad they have faded, and maybe now I’m afraid that they’ll disappear completely. Its strange loving and hating something at the same time, except I don’t hate them anymore, if anything I’m proud of them and of my story.

It was this conversation and this catharsis that inspired what my friends and I are trying to do with These Are My Scars. We all have a story to tell, if we can share our journeys and our scars whether they are physical or emotional, we can help each other deal with what they represent. For me it was the emotional scars that cut me deeper than the physical ones, once I opened up about my guilt, my fears and anxieties, I was able to embrace my physical scars and appreciate them for the beauty and strength they represented. 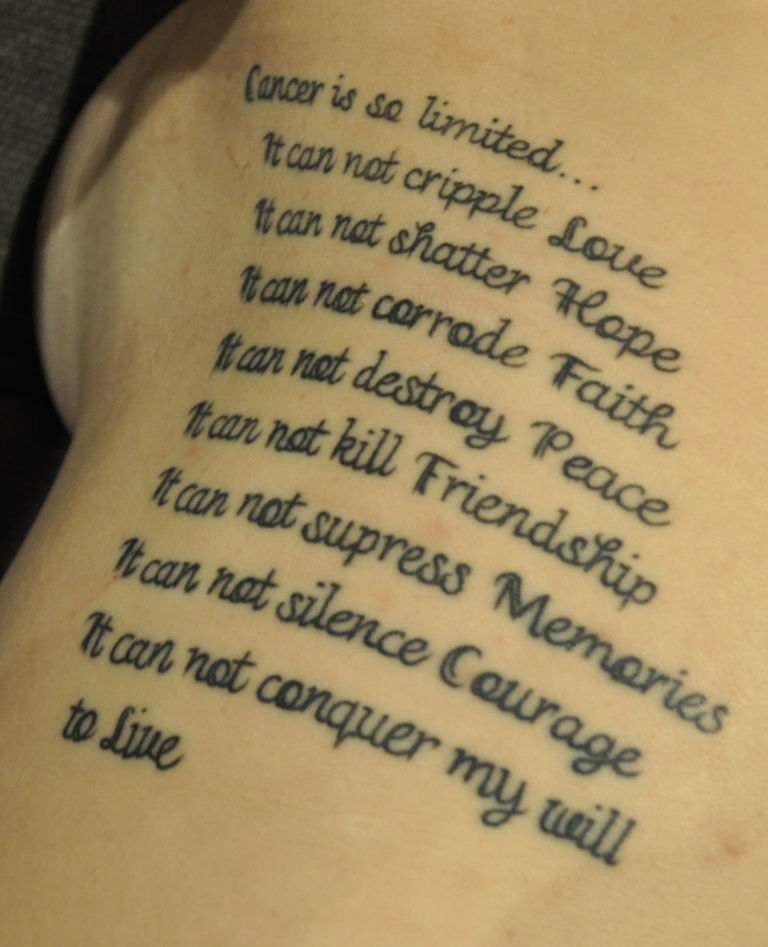 So how did tattooing help? Well, it allowed me to reclaim my body, to exert some kind of control over it, I know it’s a strange way to exert control, but when everything is out of control on the inside, being able to make a choice on how the outside looks is empowering! It has also acted as a permanent reminder that life is short, and if we are not present in the moment, we tend to miss them. I don’t want to miss moments!