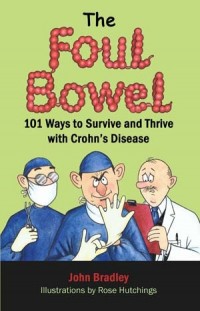 There is little in life to match the feeling of vulnerability as you gingerly step out of your changing cubicle, wearing only two voluminous yet still flimsy gowns and a pair of disposable paper slippers. The initial worry as to whether or not you tied the right bits of string together pales into insignificance as you enter the public domain feeling more naked than you have ever done before.

The first thing you notice is that it is quite chilly, especially as, most likely, you are not used to cool air wafting freely in your nether regions. Then you are immediately propelled into the presence of other, equally discomforted people wearing exactly the same outfit. As with any visit to a hospital, plenty of waiting around is the order of the day. Of course, wearing next to nothing in the presence of complete strangers dampens down your desire to be sociable, so this initial waiting stage is inevitably conducted in a monastic silence and completely excludes even a glimpse of eye contact.

So, once again, any reading material whatsoever assumes a profound and deep level of interest as you pretend to be engrossed in an eight-year-old, extremely dog-eared Reader’s Digest. You ignore the fact that half the pages are missing and the other half fall onto the floor with regularity.

Your equally uncommunicative fellow travellers are picked off one by one as their names are called out from a sheet, and you soon begin to doubt that your name will ever be called at all. Have they forgotten you? Are you in the right waiting area, or even the right hospital? Again, no one ever lets his doubts turn into action as the uncalled sit there mute and forlorn.

You are also acutely aware that, due to the gown arrangement, your wedding tackle could be in full view of the people sat opposite, which prompts you to adopt the most convoluted seating position to exclude any possibility of exposure. One moment of inattention could result in you unthinkingly adopting the habitual male position of maximum angle between the legs or, even worse, crossing your legs. So the need for complete focus on the seating position means that you have no chance whatsoever of taking in a word on the page in front of you, or even of spotting that the pages you have open were reinserted upside down by a previous reader.

Finally, you are called through. But it proves to be the usual false dawn as you go round a corner only to see that your relatively cosy waiting area has been replaced by a handful of hard-backed chairs in a corridor. I’m sure Walt Disney learned his techniques of how to disguise the length of the wait from a past hospital visit; although he improved on the science with the idea that being entertained by Mickey Mouse enhances the passage of time better than staring at lime-green walls.

Tip #9: Take Something to Read I have never once regretted taking something to read with me on a hospital visit. These places seem to operate in a parallel universe where time moves at one-tenth the speed it does outside. I sometimes buy small, inexpensive paperback editions of the classics just for this purpose. Sherlock Holmes, Dracula, Dr. Jekyll and Mr. Hyde (not sure about that one), Treasure Island have all earned their cover price in keeping my mind off things while waiting around in hospitals.

Sitting in the corridor, you then experience another prolonged and unexplained wait, but this time without a randomly ordered Reader’s Digest to capture your attention. You might be given a form to fill in or you may just sit there with only your potential groin visibility to keep you occupied. It is at this stage that worries creep in, no matter how outlandish. What if it goes wrong? How long will you be under the anaesthetic? Will it be the Laughing Gas, last experienced in a nightmarish visit to the dentist’s? While the initial waiting area was mostly nurse-free, you are now in their territory and they are buzzing around like worker bees. And it is at this point you first experience every man’s medical nightmare: the fear of the inappropriate and unjustifiable erection.

Of course, it makes no sense in the cold light of day; you cannot imagine a less erotic setting or occasion, which makes the fear ten times worse because there would be simply no way to explain it away. It is not that one thinks it likely that man’s best friend will randomly spring into life; it is the certainty of the absolute humiliation that would follow should the unthinkable happen. There would be no hiding it. No number of gyrations could disguise the tent-like structure that the gowns would surely adopt. One might as well set off the fire alarm for the attention that would inevitably follow.

Alas, I have no advice to offer on dealing with this problem. In fact, I have found that the fear only worsens as you get older. At the age of 18, there is at least a shred of justification as the one-eyed beast does have a mind of its own. But at 50, I would just be a dirty old man. Even though it has never happened to me, the fear remains as gripping as it ever did. As the equipment ages and the chances of a random stiffy fade, the stakes get higher because the humiliation would be even deeper. I don’t know what women worry about at this stage, perhaps they sit there thinking, “Oh my God! Is that dirty old man just pretending to read that upside down Reader’s Digest while trying to look up my gowns? And I hope that fold in his gown isn’t an ERECTION!!!”

Or maybe it’s just me that has erection fear. After all, I have never discussed this issue with a fellow patient. Perhaps I was scarred by the fact that, as I waited in the corridor for the next stage of the pre-pile removal process, the nurse who approached me calling my name was someone I vaguely knew. She had been a classmate of my cousin, and I had briefly met and chatted to her at some school disco or other. Plus, she was nice-looking – in fact, a real hottie.

Uuuurrggh!!!! The potential embarrassment stakes had now shot into the stratosphere. Firstly, I probably had past form in having an erection while talking to this delightful girl. But much worse, not only would I have to face humiliation in some corridor of Blackburn Royal Infirmary, but that same humiliation could be broadcast to a social circle – my cousin’s pals – who I considered to be my primary source of potential girlfriends should my current arrangements be terminated. I briefly considered if I would be protected by some kind of nurse-patient confidentiality clause, but rejected that as unlikely. So, with a complete and utter focus on completing difficult mental arithmetic sums, I followed her into the next stage of the process, enraged at myself for not being able to look away from her sashaying, pert-looking bum.

Tip #10: Don’t Eye Up the Medical Staff No good will come of it. Firstly, if you are male, why increase the risks of your own humiliating version of Billy Smart’s circus tent, and secondly, none of us look our best wearing institutional gowns so you will only be viewed as being sad and pathetic. If you forgot your book, close your eyes and go to your happy place (not THAT happy place, obviously.)

The Foul Bowel, written by, John Bradley, a real Crohn’s sufferer, is a candid, humorous and inspiring user’s guide to living with Crohn’s disease which distills experience and hope into 101 tips for the newly diagnosed, the discouraged veterans and the resigned-to-their-fate Crohnies. It won’t cure you, but WILL make you feel better about being a Crohnie. To read more EXCERPTS from The Foul Bowel, click HERE.