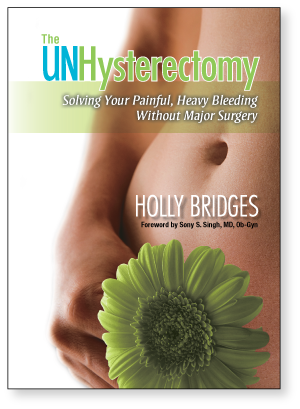 The following excerpt is from the book The UnHysterectomy, based on Holly Bridges’ journey to avoid a hysterectomy after being diagnosed with life-threatening anaemia caused by multiple fibroids.

Listen up, gals. We have an opportunity on our hands, an opportunity to change the course of history. Not by marching or carrying placards or burning effigies, but by simply saying these three words: enough is enough.

If we, as women and as patients, demand the kind of change I am proposing in this book, we could improve the health, safety and quality of life of women worldwide; get them back on their feet faster and with less pain, less risk and fewer complications; save billions of dollars in unnecessary surgeries and postoperative hospitalization due to complications; invest that money into research, public awareness and prevention; free up our precious operating rooms for those who really need them; and alter the way our society perceives and treats painful, heavy periods. As amazing as it sounds, we may even increase our fertility rates as many younger women (some of whom you will meet in Chapter 14) who were previously told hysterectomy was their only treatment option are now able to conceive and have children as a result of an explosion in technology that has the potential to one day make hysterectomies almost obsolete.

The hysterectomy epidemic stems from many things, which I will discuss in this book, not the least of which is a cultural bias on the part of old-school gynecologists performing old-school surgeries. If we can learn to stop smoking, wear seatbelts, use child car seats, sleep our babies on their backs, not drink and drive, sneeze onto our sleeve instead of our hands, recycle and compost, we can stop offering hysterectomies as the default surgery for treating painful, heavy bleeding. And you know what? There are at least 10 things you could be doing to get your bleeding under control that do not involve a hysterectomy. Some of these things can be done in the time it takes to make an appointment with your doctor. Others take a lot longer.

Choosing to have a minimally invasive alternative hysterectomy, or an alternative procedure, is not for the faint of heart. It may take time to find the right doctor and even longer for him or her to schedule your procedure, not something you want to hear when you feel like you’re bleeding to death. I have heard from women around the world who are on the brink of collapse, not only from trying to manage their symptoms, but from trying to assert themselves with their gynecologists or their healthcare or insurance systems. Accessing minimally invasive surgery is not a fast and easy fix. From the time I started bleeding heavily to the time I had my state-of-the-art procedures, almost two years had passed. For many women, it can take five, six or even seven years. A lot of people ask me why I chose to prolong my suffering when I could have had a hysterectomy to solve the problem permanently, and much more quickly. To this day, I’m not quite sure I can articulate it. There was a lot at stake for me – my uterus, my womb, the place where I carried my children. It was just as much a part of me as testicles are for a man. All I can say is the woman in me said, “It just didn’t feel right.” The researcher in me said, “It wasn’t medically necessary.”

Holly Bridges is a former CBC Radio and TV journalist with 30 years’ experience in communications. She has lived and worked in every major city in Canada and has won five awards for her writing.  The UnHysterectomy: Solving Your Painful, Heavy Bleeding Without Major Surgery, is her first book.

The UnHysterectomy is based on Holly’s journey to avoid a hysterectomy after being diagnosed with life-threatening anaemia caused by multiple fibroids. The book outlines 10 medical and surgical alternatives that are less painful, less risky and less invasive than hysterectomy and explores the many reasons for the over-prescription of hysterectomy in North America and around the world. The book contains medically-accurate, thoroughly researched information on heavy periods and their causes told through the eyes of women who experience the symptoms every day, and the forward-thinking, visionary gynecologists who have treated them; every word was vetted and approved by a team of experts from Canada, the United States and Finland, including two gynecologists who regularly appear on The Dr. Oz Show, Dr. Lori Warren and Dr. Jennifer Ashton.

The US/International edition of The UnHysterectomy: Solving Your Painful, Heavy Bleeding Without Major Surgery is now available at www.amazon.com. The US edition is available in Kindle format.