It was the best week of skiing I had had all season. The Wasatch had accumulated 24+ inches of Utah’s finest and I was LOVING life. I was unemployed, going to school twice a week and had plenty of time and friends to do what I do best; stomp into my skis and hit the mountains with a smile on my face. I got freshies at Solitude, toured up Big Cottonwood and skied Powder Mountain with a good friend. 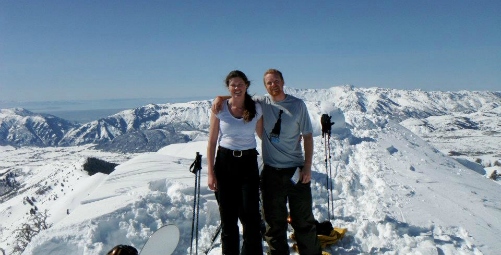 As I hiked I started to feel a weird pinch on my right side under my rib cage. The sensation caused me to pause for a moment or two to wonder what it was, but I continued slogging, thinking nothing of it. A small cliff with wet snow made me crash once on the descent, but even that didn’t seem like a big deal. We skied until close and drove home sunburned and happy.

I tossed and turned all night. The side I usually slept on felt oddly uncomfortable and I woke continuously to roll to my other side. As my feet hit the floor the next morning, I knew something was up. Pain shot up my right side, chest and shoulder with each step and within the hour I was on my way to the doctor’s office. Between sips of air and restraining tears I explained to my regular physician that I was having chest pain and increasing difficultly breathing. ”We can’t help you,” she said. “You should go the emergency room.”

Every bump in the road sent stabbing pain into my chest, reclining in the hospital gurney was unimaginable torture and morphine didn’t touch my pain. After cardiac biomarkers came back positive, I was off to the CT and a large PE was found in my right lobar pulmonary artery. 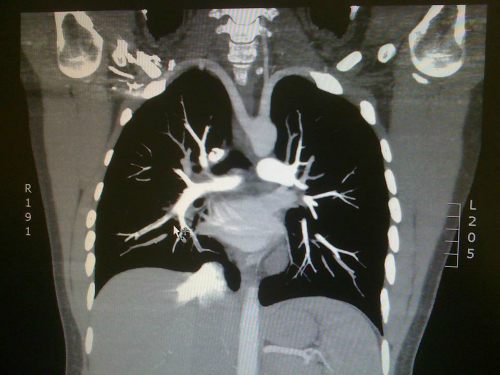 My physician visibly relaxed once she had found the culprit of my pain and sat across from me calmly explaining that I would start a heparin drip, get on Coumadin right away and that everything would be fine. Coumadin?! I knew that drug. I had been taking INRs from older patients all winter. Panic and dread shadowed any sort of hope she was giving me.

That week in the hospital was a blur. My nurses and I had trouble controlling my pain, I had an Echo test, and blood draws for genetic clotting disorders. Based on my family and medical history my hospitalist concluded that the the clot was most likely caused from the birth control Gianvi, a generic of Yaz, that I had been on for two years. I was bombarded with information about clotting disorders, drugs, nutrition and the lifestyle changes the accompany a risky drug like Coumadin. Everyone around me had to whisper and be careful not to make me laugh because it hurt so much. I celebrated my 22nd birthday with my family and nurses. 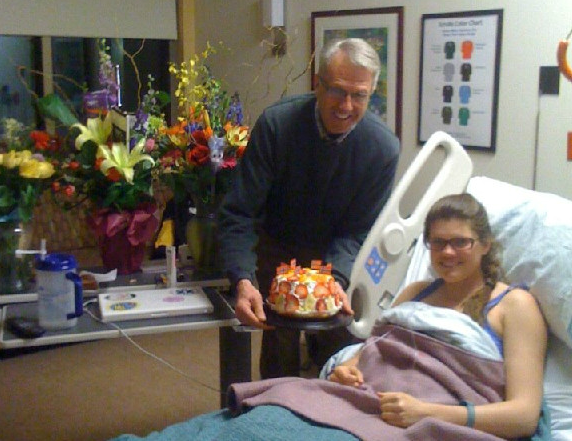 Getting out of the hospital was a huge victory for me, and I was thrilled to be alive and clear-headed enough to go home.  Regaining independence and enough strength to take care of myself was a whole other battle.  I shuffled around like a turtle and was constantly exhausted. My old PCP that prescribed me the Gianvi and I had a falling-out shortly after — she did not empathize with me and lacked the expertise and care that Coumadin requires. Instead, a slew of specialists made up my healthcare team: my new primary care physician, hematologist, gynecologist, pulmonologist, and clinical pharmacists took great care of me.

The week I was in the hospital was the beginning of mid-terms right before spring break.  Luckily the week off allowed me to recover enough to return to school to make-up my mid-terms.  I was too stoned from pain killers and failed all of them.

The following weeks were a huge challenge. I was having trouble keeping my INRs within therapeutic range so I was on Lovinox shots for 6 weeks, which you may or may not know is quite painful and SUPER sexy… 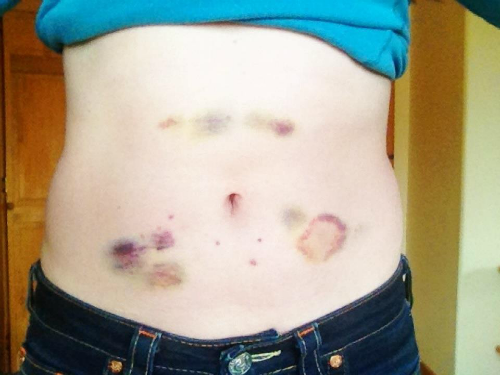 My life as I knew it had changed over night. I couldn’t hang out with friends let alone go climbing or skiing from fatigue.  I had to be vigilant with my diet to the point of boredom, asses risks as every turn (the first day I drove myself to the doctors was terrifying for fear of being in an accident and bleeding out on the side of the road) and a single out-of-range INR result tore my paper-thin confidence to shreds.

None of my friends seemed to understand my struggle.  I still looked normal and health, so what was the big deal? My friends, classmates and professors couldn’t tell that I was in pain, constantly on the verge of tears and thinking more about rare blood clotting disorders or situations that would cause make me bleed instead of focusing on my school work.

One thing that baffled me was that my physicians said I could absolutely under no circumstances ski, climb or bike. That it was too dangerous for me even through I knew I was in less danger with skis on my feet than driving down Parley’s Canyon with crazy drivers all around me. I began exploring my assessment of risk.  Based on the consequences of getting hurt on Coumadin, my level of happiness and the amount of risk I was willing to take for my own happiness, I decided sky-diving was the perfect sport for me to try out.  I’m a girl who doesn’t live life “grounded” so, I figured I could huck myself out of an airplane and either have an extremely high impact that would kill me either way, or have the time of my life for a few glorious moments at terminal velocity. 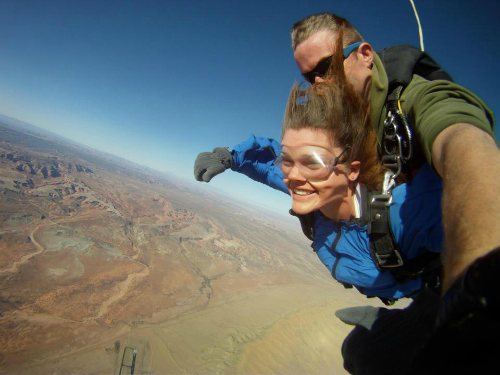 It was totally worth it.  I told my parents and physicians later.

Once the pain subsided and I got in the hang of the Coumadin, things started looking up. Blood thinners were the best thing that could have every happened to my grades — I got straight As throughout since studying was very much a Coumadin-approved activity.  On the weekends I wracked my brain for new activities that would excite me and keep my body in relative safety.

I learned to shoot a gun, went fly fishing, and worked out.. A LOT.

All of which saved me on my saddest, loneliest and most hopeless days. I did venture out on my mountain bike twice, but I was so focused on being careful that of course I fell and had large purple bruises marking my recklessness for weeks.

Toward the last few months I was going crazy.  The end was in sight and I wanted it SO SO badly.  My depression and fear was overwhelming. I even cancelled my flight to Norway for a two-week family vacation because I was scared I couldn’t get enough greens to keep my INR stable. GREEN VEGETABLES for goodness sake!!

I also came to a reckoning with my greatest fear.  Since the possibility of death was behind me, the worse-case scenario would be having an blood clotting disorder that put me on Coumadin for life. I decided that if that happened, I could and would move on to become the most kick-ass doctor I could be.  On the other hand, if I got off Coumadin scotch-free I would: go work as a medic at Burning Man, climb the Grand Teton, mountain bike, climb all over the west and make BIG ski plans for the winter.

When my doctor told me my genetic blood tests were negative and I could resume life as usual in 48 hours, I cried.  He delivered the news so simply, yet I could hardly believe my ears. I have been celebrating life ever since and following through with the goals I set. 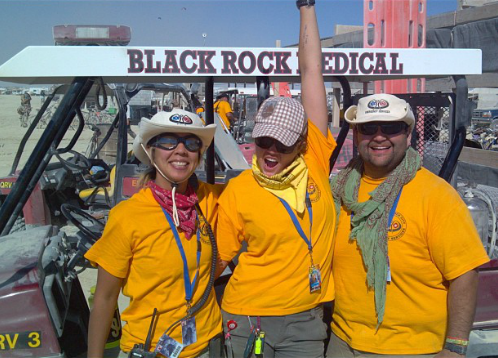 I am not the same woman I was 8 months ago.  I see life in a different way than many of my peers.  I am shameless in my joy for the mountains, good friends and my health.  I don’t sweat the small stuff anymore — a stranger with a bad-attitude is SO not my problem since I know I’m living a happy, healthy life.  I have a drive within me that didn’t exist previously; my illness allowed me to clarify my goals, focus on what I need to accomplish those goals and to do it right the first time.  I’m more in tune with my body, more compassionate with others, a better sister, daughter and friend.  At this point I am actually grateful for my PE and experience on Coumadin because I have learned what it takes to live for my dreams and desires.

In the words of Napoleon Hill, “No one is ever defeated until defeat has been accepted as a reality.” So to whoever reads this, I hope that my story reignites hope and desire within you to become the happy and healthy person you were meant to be. There is no other option.

Trine Vik is a survivor and patient advocate, on a mission to help others who have suffered from traumatic health crisis overcome limitations that disease and medications pose upon on lifestyle and happiness. Contact Trine for a free consult to learn how she can assist you on your road to recovery, health and living a life you love.