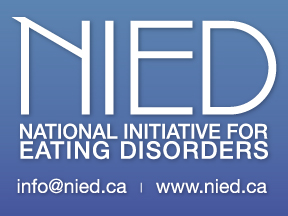 As a parent, whose 27 year old daughter has struggled with Anorexia and Bulimia for over 12 years, Wendy is the passionate voice and driving force behind the National Initiative for Eating Disorders (NIED). Having lived with a sufferer and experienced the devastating effect Eating Disorders have on families and extended family and friends, Wendy reached the point of no return in late 2011. She could no longer sit back knowing her daughter was falling through the cracks of health care system that had failed her family and so many others in the same predicament.

Together with a core team of passionate advocates Wendy formed NIED in February 2012 to drive Eating Disorders awareness, understanding and action.

The National Initiative for Eating Disorders (NIED) is a not-for-profit coalition of dedicated health care professionals, counsellors and parents with children suffering from Eating Disorders.  Since we formed NIED in February 2012, we have become a respected and powerful voice, promoting Eating Disorders education and awareness to create positive change for a seriously underfunded, under-represented and misunderstood brain disease.

Did you know Eating Disorders have the highest mortality rate of ANY mental disease?

We collaborate with community groups, doctors, nutritionists, psychologists, social workers, the courts, agencies, and like-minded organizations. We also promote knowledge with professionals, teachers and support staff in schools.  We are educating about the management of Eating Disorders, predisposing and risk factors, and how to notice and respond to early indicators.

Perhaps most importantly, NIED has been the catalyst to create a Canadian National Eating Disorder Foundation. Every major disease has a foundation for research, prevention, treatment and funding. Eating Disorders have nothing currently. In October 2013, representatives from every province in Canada will be attending a meeting in Toronto to elect a board and to get the foundation started.

Trained as an Early Childhood Educator, Wendy taught pre-school in South Africa and Toronto before becoming a home-based entrepreneur helping people complete meaningful family photo albums. She is also as a partner in a small business that helps seniors and others downsize and relocate. A serious, energetic, get-it-done-now “do-er”, Wendy, currently divides her time between her family and grandkids, NIED, her businesses and volunteering at the Hospital for Sick Children as she has done for the past nine years.