“I think we can agree on one thing: that we all woke up one morning and whatever the focus of that day was, that changed. What is up with this bleeding? What the heck is up with the clotting?” – Patricia

Seven years ago, I had the first real health crisis of my adult life. After several months of denying obvious signs that all was not well with my digestive system, the day came when I couldn’t eat anything without pain. I remember one episode of pain so crippling that I lay crying on my bedroom floor in the fetal position, unable to even drag myself to the emergency department just metres from my home.

Over the next several months, I saw lots of doctors, none of whom could tell me what was wrong with me, and some of whom implied that there was nothing wrong with me. I spent a lot of money on different therapies. I was prodded and poked, and had tubes forced down one end and up the other.

Desperate for relief, I put myself on a very restricted diet. I retreated from social life—believe me, you’ll never understand how much our social lives revolve around food and drink until you can eat or drink next to nothing.

I missed a lot of work (I was fortunate to have an empathetic boss). A couple of times I even had unnoticed, yet nonetheless humiliating, “accidents” at work.

I lost a lot of weight (and I’m thin to begin with). I was tired and weak. I was overwhelmed, because my time and my focus were consumed by my malfunctioning gut. I was sick of tolerating the well-meaning but uninformed advice of loved ones, including the boyfriend to whom I was continually apologizing for being continuously stressed out. I was depressed.

Mostly, though, I was just scared, because I didn’t know whether I had something as innocuous as a food sensitivity or something as terrifying as cancer.

In short, this experience sucked.

Illness—even as relatively short-lived as mine—can be a life-altering experience. In the video below, Mazal Kimhi, one of the 15 women behind the growing uterine fibroid patient movement, describes how her life changed when she started bleeding abnormally:

“Everything stopped”—powerful words from a woman whose lifestyle, relationships, career, even her own sense of womanhood, were impacted by fibroids. 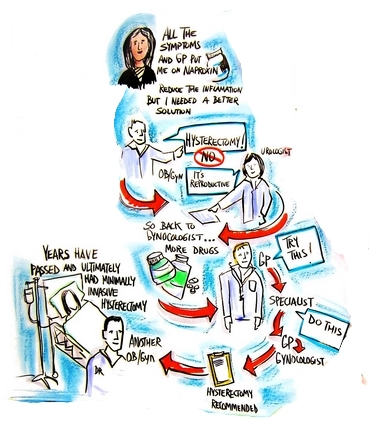 No woman’s life should become smaller, as Mazal described it, because of a bleeding disorder. Sadly, navigating a straight path to a cure, or just simple relief, is challenging.

All of us—women especially so, perhaps—have been socialized to be passive in interactions with healthcare professionals. Even if we know about treatment options, we are expected to defer to “the expert.” Add the stigma of bleeding to the mix and the outcomes of consultations are often unnecessarily prolonged treatment journeys. Just take a look at the 5-year journey from symptoms to diagnosis to treatment shared by one of the movement’s founders.

Endometriosis in particular can make for a hellish journey, as Holly explains here:

A healthcare journey like that would leave any one of us feeling hopeless, vulnerable and defenseless, without the strength to advocate for our best interests. No wonder these 15 women are committed to helping others find their voice and become better equipped to take charge of their own healthcare.

We’ll start showing you how to do that in the next installment .

To see all of the Fibroid Movement videos click here.